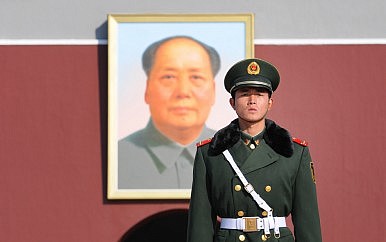 At The Diplomat, Kerry Brown explores contrast in the perceptions held by Chinese people and those held by foreigners about China’s power in the world:

It was a tough question, but it sounded innocuous enough when first asked by a Chinese guest. “Why,” the guest said, “does the world outside China think our government is very strong, while people in China always feel that the government is actually weak?”

A first stab at an answer could have argued that the mismatch comes from trying to discuss two separate things. Outsiders are getting edgy about evidence of China’s increased international influence, its rising military expenditure, and what is seen as assertiveness toward neighbors like Japan. Inside China, people are irritated by the problems outlined in the 2009 book Unhappy China — a government unable to sort out food safety, smog in the cities, or a decent health system. Surely it is a classic tactic to be tough toward the outside world when you are weak within. Once we pick apart the domestic and external parts of the equation, the mysterious mismatch raised by my Chinese friend becomes understandable: weakness on one side is compensated for by strength on the other.

Even so, it is still irritating that we have no coherent concept of what qualities the Chinese state does, in fact, have. This ambiguity about such a major actor is unnerving. Having contradictory perceptions about the same entity — saying it is strong and fragile at the same time — subverts our intuition and prompts us to search for a better explanation to iron out the conflict. […] [Source]