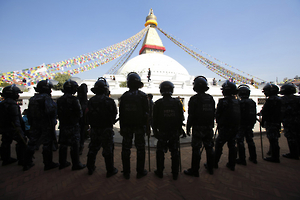 According to a new report from Human Rights Watch (HRW), Tibetan refugees in Nepal are starting to see curbs on their freedoms of speech and assembly due to increased pressure from China. From Gopal Sharma at Reuters:

Nepal is home to more than 20,000 Tibetans – for many from as far back as 1959, when their spiritual leader, the Dalai Lama, fled to India after a failed uprising against China.

In its report, HRW said Tibetans in Nepal faced a “de facto ban” on political protests against China and curbs on public activities promoting their culture and religion.

Tibetans interviewed by the rights body accused Nepali security forces of abuses such as excessive use of force, arbitrary detention, intimidation and intrusive surveillance.

“The situation for the Tibetan refugee community in Nepal has markedly deteriorated since China’s violent crackdown on protests in Tibet in 2008,” said HRW’s Asia director, Brad Adams. […] [Source]

As China’s relations with Nepal have warmed in recent years, the annual influx of Tibetan refugees to the small Himalayan nation has lessened, and the elected prime minister of the Dharamsala-based Tibetan Government-in-Exile Lobsang Sangay has been quoted saying that “Nepal has become almost a satellite state of China.”