The Specter of June Fourth 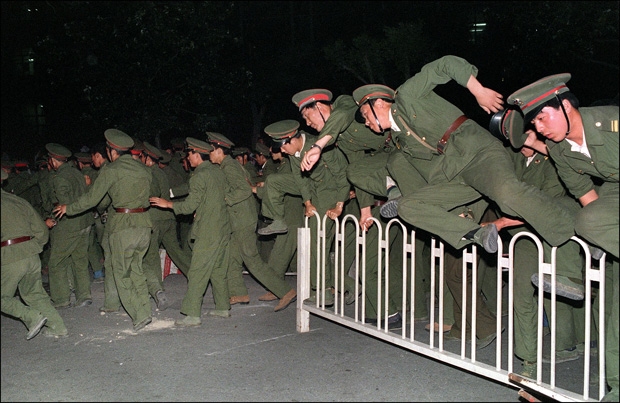 In an adaptation of his introduction to Rowena He’s Tiananmen Exiles: Voices of the Struggle for Democracy in China at China File, Perry Link explains why the bloody events of June 4th, 1989 cast such a long shadow:

The massacre therefore created a puzzle for Deng Xiaoping and the other men at the top. With no more “legitimacy” to be drawn from claims about socialist ideals, where else could they generate it? Within weeks of the killings, Deng declared that what China needed was “education.” University students were forced to perform rituals of “confessing” their errant thoughts and denouncing the counterrevolutionary rioters at Tiananmen. These were superficial exercises that had little real meaning. But Deng’s longer-term project of stimulating nationalism and “educating” the Chinese population in the formula Party = country turned out to be very effective. In textbooks, museums, and all of the media, “Party” and “country” fused and patriotism—literally “love country” in Chinese—meant “loving” the hybrid result. China’s hosting of the 2008 Summer Olympics was a “great victory of the Party.” Foreign criticism of Beijing was no longer “anti-communist” but now “anti-Chinese.” Conflicts with Japan, the U.S., and “splittists” in Taiwan and Tibet were exaggerated in order to demonstrate a need for clear lines between hostile adversaries and the beloved Party-country. […]

So the regime still needs to include these memories among the kinds of thought that need to be erased from people’s minds. It uses both push and pull tactics to do this. Push includes warnings, threats, and—for the recalcitrant—computer and cell-phone confiscation, as well as passport denial, employment loss, bank-account seizure, and—for the truly stubborn—house arrest or prison. Pull includes “invitations to tea”—a standard term in the lexicon of people whom the police try to control—at which one hears smiling reminders that a better life is available to people who stop talking about massacres; advice that it is still not too late to make this kind of adjustment in life; comparisons with others who are materially better off for having made just that decision; offers of food, travel, employment, and other emoluments (grander if one cooperates by reporting on others); and counsel that it is best not to reveal the content of all this friendly tea-talk to anyone else. [Source]

For the upcoming 25th anniversary of the June Fourth democracy movement, Human Rights in China has launched a new initiative called “June Fourth at 25: Resisting Enforced Amnesia, Building a Just Future” that documents the lives of June Fourth victims. From HRIC:

The lead component of the initiative is the “Records of Visits and Interviews with Families of June Fourth Victims,” a collection of stories about 16 June Fourth victims and one survivor, written by members of the Tiananmen Mothers based on their visits and interviews with the victims’ families that began in fall 2013.

In all these years, and through all the energy and effort we had expended, we had not been able to get justice for our loved ones, or slow the pace of old age or sickness among our fellow family members who had shared in our common struggle over all these years. . . .  What should we do for those who have passed away? And how should we commemorate the lost souls of June Fourth?

Their answer was to document the lives and deaths of the victims as a way to honor them and to continue to press for justice. [Source]

See repostings of daily original news reports from 1989 via CDT. Former China Beat editor Maura Cunningham has also compiled a related selection from the site’s archive at her own blog.