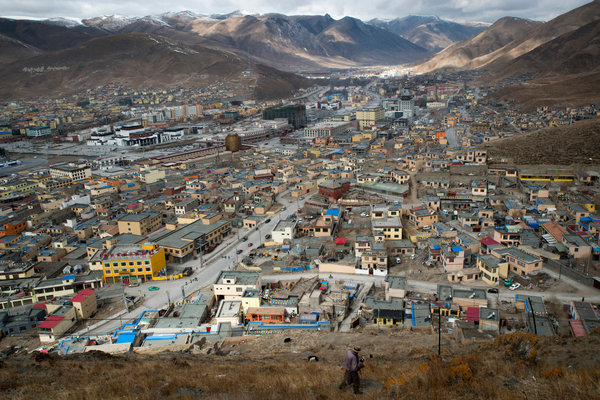 In remote Jyekundo (Yushu), Qinghai Province, a 7.1 earthquake hit in April 2010, killing at least 3,000 people. Situated at a 12,000 foot elevation, the town is a 17-hour drive from the nearest cities. Andrew Jacobs at the New York Times visited the area to find many residents disenchanted with the government’s rebuilding efforts, which have left many with no place to live:

“The government solved the immediate needs of sleeping and eating, but we hope they can finish the job they started,” said Jamyang, 27, who has lived at the hilltop monastery since he was a boy. “There are some people feeling neglected.”

Natural disasters can challenge even the most capable and affluent of nations, but the 7.1-magnitude earthquake that flattened this geographically isolated trading hub has tested the Chinese government’s ability to marshal labor and construction supplies in one of the world’s most inhospitable places.

Despite a herculean effort and Beijing’s best intentions, the $7.2 billion reconstruction project has inadvertently aggravated the animosities that have long bedeviled Han-Tibetan relations, favoring the well connected over the disenfranchised and fueling the systemic corruption that often plagues large infrastructure projects in China.

In Yushu, the absence of public participation or transparency provided local officials ample opportunity for self-dealing, angering members of an ethnic minority that the government can ill-afford to alienate. [Source]

Read more about the 2010 earthquake, via CDT.