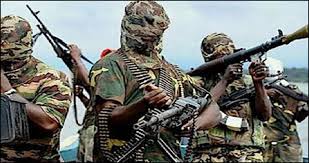 Chinese state news agency Xinhua quoted Chinese officials as saying unidentified assailants had attacked the camp of a Chinese enterprise operating in Cameroon on Friday night, injuring one person and leaving 10 unaccounted for.

West African leaders meet in Paris on Saturday to try to improve cooperation in their fight against Boko Haram. [Source]

Emmanuel Tumanjong at The Wall Street Journal reports on Saturday’s meeting in Paris between Nigerian President Goodluck Jonathan and Western and African leaders to improve cooperation in the fight against Boko Haram:

The Friday evening assault in Cameroon marked the latest cross-border attack from a Nigerian insurgency blamed for a spate of recent kidnappings. News of the attack surfaced Saturday, on the same day Nigeria’s president, Goodluck Jonathan, met in Paris with Western and African leaders.

Participants at the meeting agreed to forge a plan for combating Boko Haram, after the Nigerian militancy abducted nearly 300 schoolgirls and killed scores of civilians in recent shooting and bomb attacks. [Source]