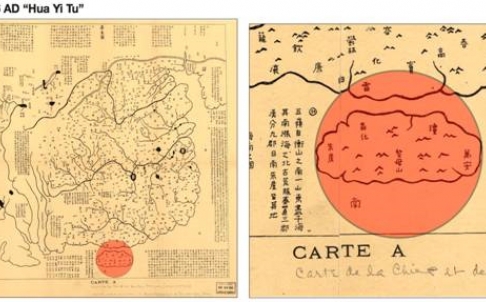 Raissa Robles at the South China Morning Post reports on a judge’s analysis of the Philippines’ claim over disputed islands, “citing his analysis of old maps and calling Beijing’s nine-dash line that extends into Southeast Asia “a gigantic historical fraud”:

Senior Supreme Court Judge Antonio Carpio challenged Beijing’s claim to 90 per cent of the 3.5 million sq km resource-rich South China Sea, part of which is also claimed by Manila. The Philippines has filed a case with the United Nations challenging Beijing’s claims.

Meanwhile, tensions between China and Vietnam have escalated in recent weeks following Beijing’s dispatch of an oil rig to waters surrounding another contested island group, the Paracels.

Carpio used a recent lecture to present 72 ancient maps – 15 of them of Chinese origin. All supposedly showed China’s southern border ending at Hainan.

The maps have long been freely available to view through the US Library of Congress, but it is the first time a Philippine official has closely examined the maps. “All these ancient maps show that since the first Chinese maps appeared, the southernmost territory of China has always been Hainan Island, with its ancient names being Zhuya, then Qiongya, and thereafter Qiongzhou,” Carpio said.

He said it was important to establish that Beijing had no historical claim to the territory, even if “historical facts” can no longer be invoked under the United Nations Convention on the Law of the Sea, because Beijing had warned it was prepared to fight for it. [Source]