Chinese Women Standing Up to Inequality 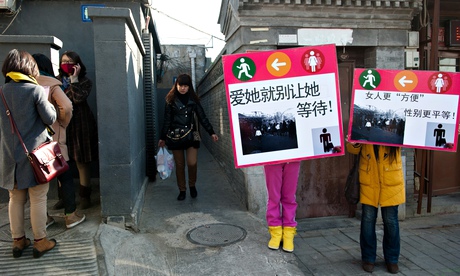 The Guardian’s Tania Branigan describes the efforts of some Chinese women to battle worsening gender discrimination:

When half a dozen topless women took to the roadside in Guangzhou this spring bearing signs calling for female equality, it looked like the latest in a series of imaginative stunts by young feminists.

In the past couple of years, performance-art style actions – often cheeky or humorous, always eye-catching – have raised awareness of the challenges facing women in China. Twenty-somethings staged Occupy the Men’s Toilets to challenge the lack of female facilities, shaved their heads to highlight higher college admission requirements for female applicants, and donned wedding dresses daubed with red to focus attention on domestic violence.

The truth about the Guangzhou incident is even more curious. Those involved in the previous events say the women in body paint were nothing to do with them, and are convinced it was a viral marketing stunt for a soft drinks brand. Though some are perturbed by the commercial hijacking of their message, at least a couple are oddly cheered by it.

“It shows our activities have had an impact,” said Xiao Men, who, like the others, uses a nickname. [Source]

Read more on women’s rights in China via CDT.