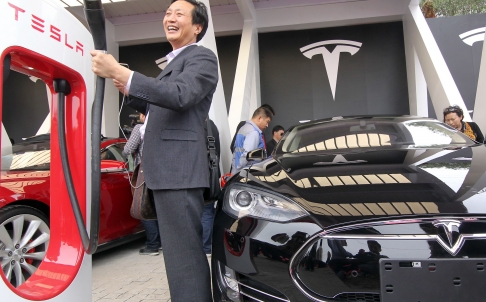 A team from Zhejiang University claimed the top prize of US$10,000 at the Symposium on Security for Asia Network (SyScan360), a security conference taking place in Beijing this week where attendees had been invited to hack into a Tesla Model S.

[…] Hackers exploited a “flow design flaw” to gain access to the Tesla car’s system, SyScan360 announced on Weibo. The loophole enabled attackers to remotely unlock the vehicle, sound the horn and flash the lights, and open the sunroof while the car was in motion. Organisers say they have reported the vulnerability to Tesla.

[…] Last year, a team of researchers from the US Defence Department’s Defence Advanced Research Projects Agency (Darpa) remotely hacked into Toyota and Ford electric cars and was able to activate the horn and disable the brakes while the vehicle was in motion. [Source]

Tesla welcomed the discovery, but has faced other recent challenges in China, including an attack by an alleged “trademark troll” and exclusion from Beijing’s planned network of 10,000 rapid-charging stations. Tesla’s own Chinese charger network currently consists of just 72 stations in 17 cities according to the Wall Street Journal’s Rose Yu and Colum Murphy, who report that an asthmatic businessman has built his own network between Beijing and his base in Guangzhou:

[…] The charging posts are scattered every 300 kilometers, and more than half of them are placed at or close to four-star hotels. “These hotels have spacious parking lots, sufficient electricity power and can offer 24/7 services. That’s attractive to electric car drivers,” said Mr. Zong. Tesla now lists some of the sites on its website.

[…] In addition to building the charging spots, Mr. Zong also ordered another 20 Tesla Model S vehicles as an incentive for his senior management. “If I give them one million yuan, some might take the money and buy cars with great horsepower. That’s not in line with the environmentally friendly image I’m building for my company,” he said. [Source]