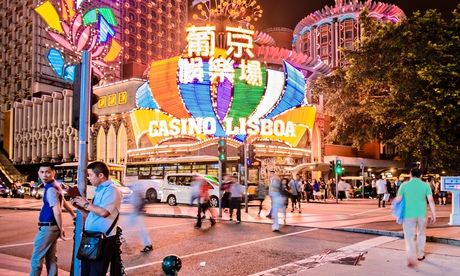 Taking a cue from Hong Kong, where last month an unofficial poll on electoral reform gathered nearly 800,000 votes, activists in the semi-autonomous territory of Macau are planning a similar poll on democracy. The Guardian reports:

Three activist groups in Chinese-ruled Macau, the world’s biggest gambling hub, are planning an informal referendum on democracy, following in the footsteps of neighbouring Hong Kong whose ballot was branded by China as illegal.

Macau, a special administrative region of China like Hong Kong, is widely expected to re-elect its current leader, Fernando Chui, in a vote on 31 August. But it is an official body of 400 that elects the leader, similar to Hong Kong where a small committee of largely pro-Beijing loyalists chooses who gets on the ballot, effectively rendering the ability to vote meaningless.

[…] The civic movements in Hong Kong and Macau could prove to be the biggest challenge yet to Chinese rule in the two territories. Several current and retired Chinese officials have warned in recent months that Beijing is prepared to unleash the army to handle any riots in Hong Kong.

[…] The groups organising the Macau poll – Macau Conscience, the Macao Youth Dynamics and the Open Macau Society – are planning to hold it from 24-30 August. [Source]

Coverage from the South China Morning Post describes what will be on the ballot, and compares Macau’s Basic Law to Hong Kong’s, noting that universal suffrage isn’t written into the former:

Residents will be asked only two questions in the seven-day poll from August 24 to 30.

First, whether universal suffrage should be implemented by 2019 in Macau, and second, if they have confidence in the so-far unchallenged incumbent chief executive Dr Fernando Chui Sai-on.

If a challenger surfaces, however, the second question will expand to ask voters their choice of candidate for the August 31 election.

[…] Unlike Hong Kong’s Basic Law, Macau’s mini-constitution does not specify universal suffrage as the ultimate goal of its political system. And the government has no timetable for implementing “one man, one vote” for its chief executive and legislative elections. […] [Source]

Last month’s poll in Hong Kong gave residents a choice between three proposals on electoral reform, all of which allowed for citizens to directly nominate candidates. According to the BBC, 42% of the nearly 800,000 votes were cast in favor of candidate nomination by 35,000 individual votes or by any political party which secured 5% of the vote in the previous election for legislative committee.