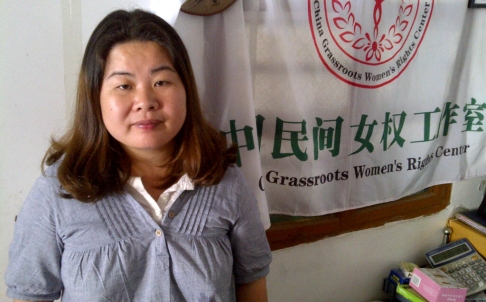 After an unsuccessful attempt to get an Australian visa to attend the 20th International Aids Conference in Melbourne next weekend, AIDS and sex workers’ rights activist Ye Haiyan says that she’s been barred from leaving China. A social worker and rights activist, Ye has made a name for herself with her work advocating on behalf of China’s sex workers. Last year, Ye was detained and then harassed at her Guangxi home after launching a high-profile protest campaign against a Hainan school headmaster accused of raping students. After relocating to Guangdong soon after, she and her family were forcibly evicted from their rental. From the South China Morning Post:

“I’m very surprised and angry about these restrictions imposed by the government,” Ye said. “I only get to see my colleagues once every two years at these conferences.”

[…] Ye last left the mainland in May to visit friends in Hong Kong, shortly before her permit to travel to the territory expired. Last month, she sent her passport to a visa handling agency in Beijing.

Ye needed an Australian visa to attend the 20th International Aids Conference in Melbourne, which is scheduled to start this Sunday. She had already booked an air ticket for departure on Wednesday.

[…] The visa agency, however, refused to process her application and told her they would send the passport back to her, Ye told the South China Morning Post. But she hasn’t received the returned passport so far.

[…] She said a government staffer in Wuhan’s Xinzhou district administration informed her that she had been placed on the so-called “red list” of people barred from leaving the country, she said. […] [Source]

According to Human Rights Watch, authorities informed Ye that her passport has been “lost.” In the HRW post, China director Sophie Richardson outlines Ye’s career a rights activist, and explains how China limiting Ye’s travel works to indirectly exacerbate the domestic HIV problem:

[…] Why wouldn’t the Chinese government want all the help it can get in tackling HIV? The track record is clear in country after country: where sex workers are criminalized, where their human rights are violated and their access to HIV prevention and treatment are denied, HIV epidemics get worse. Where sex work is legal, and sex workers can organize and promote HIV programs and services, the epidemic wanes. The International AIDS Conference is the premier global event at which policymakers, academics, activists, and others come together to swap solutions and debate strategies. Sex workers had planned to have a session in advance of the formal conference, and Ye had intended to give a presentation on “Sex workers as human rights defenders.”

[…] Ye now joins the ranks of other well-known individuals, including artist Ai Weiwei, to be prevented from leaving China. But in doing so the authorities only compound their own problems: not only do they embarrass themselves before a global audience by employing absurd and thuggish tactics to prevent Ye from participating at the Melbourne gathering, they also deny people in China access to the latest thinking and most effective strategies in combatting a serious public health challenge. Beijing can begin to minimize insult and injury to Ye and all those living with HIV-AIDS by allowing her to travel freely. [Source]