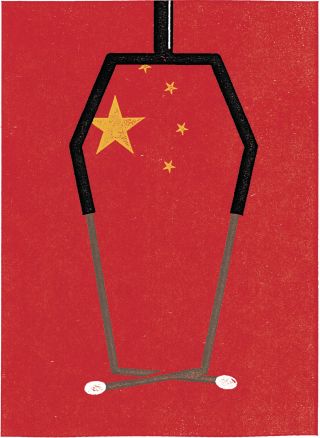 For the New Yorker, Christopher Beam looks at the problems facing China’s health care system, and rising levels of violence by patients frustrated by the lack of care they receive. He recounts the story of 17-year-old Li Mengnan who stabbed doctor Wang Hao to death after being told a hospital in Harbin could not treat his spinal condition:

The killing in Harbin was national news. The health minister called for severe punishment. When Li Mengnan went on trial, four months later, the government took the rare step of opening the courtroom to the media. The Chinese business weekly Caixin spoke of the country’s “doctor-patient conflict,” and an editorial in the British journal The Lancet warned that “China’s doctors are in crisis.”

Violence against doctors in China has become a familiar occurrence. In September, 2011, a calligrapher in Beijing, dissatisfied with his throat-cancer treatment, stabbed a doctor seventeen times. In May, 2012, a woman attacked a young nurse in Nanjing with a knife because of complications from an operation performed sixteen years earlier. In a two-week period this February, angry patients paralyzed a nurse in Nanjing, cut the throat of a doctor in Hebei, and beat a Heilongjiang doctor to death with a lead pipe. A survey by the China Hospital Management Association found that violence against medical personnel rose an average of twenty-three per cent each year between 2002 and 2012. By then, Chinese hospitals were reporting an average of twenty-seven attacks a year, per hospital.

As new details emerged in Harbin, the media’s portrait of the killer softened: Li Mengnan wasn’t a lunatic, nor did he have a history of violence. He was a man whom society had failed so completely that he was impelled to lash out. Wang Hao’s death came to symbolize the collapse of doctor-patient relations and a fundamental dysfunction in China’s health-care system.

[…] It’s not too surprising that doctors face significant public hostility. After the killing in Harbin, there were almost as many expressions of sympathy for the killer as for the victim. When People’s Daily, a newspaper that acts as a Chinese government mouthpiece, posted an online questionnaire asking readers to rate their reaction to the murder, as a smiley face, a sad face, or an angry face, sixty-five per cent of readers chose the smiley face. The survey was taken down, but CCTV aired a segment about it: a commentator mused, “Is it possible that we are all the killers?” [Source]

Read more about the death of Wang Hao and about hospital violence in China, via CDT.