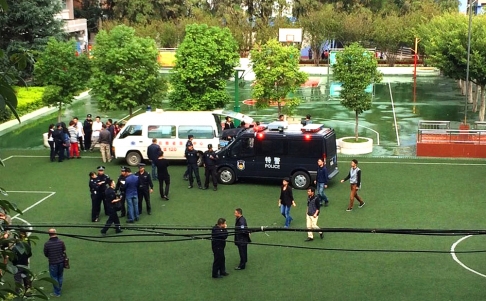 Two separate incidents in Kunming and Guangxi have resulted in the deaths of several school children. Nectar Gan reports for the South China Morning Post:

In Kunming , Yunnan province, six children were killed and 22 injured in a stampede at about 2.30pm at Mingtong Primary School, Xinhua reported.

The authorities were still investigating the case, and had not determined the stampede's cause.

[...] China National Radio reported that the incident might have been caused by a bed that collapsed and fell on the children as they played during their lunch break. The injured students were sent to two local hospitals, two of them in a serious condition.

[...] In neighbouring Guangxi province, four schoolboys, aged between eight and 11 years, were stabbed to death on their way to school in Pingshan near the border with Vietnam early yesterday morning. Three of the boys died at the scene while the other died later in hospital. [Source]

Reuters has more on the knife attack:

Police were hunting a middle-aged man after the knife attack, Xinhua said, citing the public security bureau in Lingshan county in Guangxi. Xinhua did not suggest a motive.

The man attacked the children as they were on their way to school, Xinhua said. Three of them died at the scene and one died later at a nearby hospital.

The attack comes less than a month after a man killed three children and injured several at a primary school in Hubei province.

[...] The attacks have led to much soul-searching and calls for measures to improve security at schools in a country were many couples only have one child. [Source]

Read more about incidents of violence at or near schools in China, via CDT.