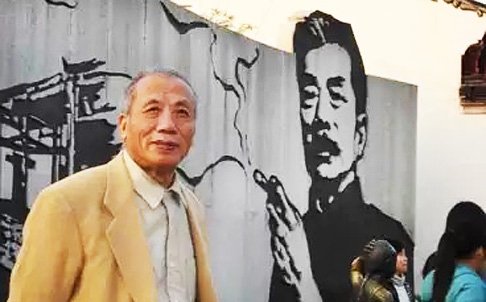 Chinese writer Huang Zerong, also known as Tie Liu, has been detained by police allegedly for writing articles critical of a senior official.

Mr Huang’s wife was later told he had been detained for “picking quarrels and provoking trouble”.

Tie Liu’s detention is the most recent episode in the Xi administration’s crackdown on liberal ideology and civil society. Last week, the trial of human rights activist Guo Feixiong was delayed after his lawyers refused to appear in court to protest unfair proceedings.

The South China Morning Post notes Tie Liu’s earlier imprisonment as a “rightist” during Mao Zedong’s crackdown on liberalism in 1956:

The detention for his critical writing comes almost six decades after Huang was first denounced as a “rightist” in Mao Zedong’s crackdown on liberals after the Hundred Flowers campaign, in which the party chairman briefly tolerated criticism but then purged those who spoke up.

The then journalist in his twenties from Sichuan served 23 years in prison.

The Communist Party cleared his name in 1980. In 2010, he vowed to set up a one million yuan fund to finance legal aid for writers and journalists. [Source]

The New York Times describes Tie Liu as a bridge between two generations of dissidents in China, his misestimation of President Xi, and his publishing work since being political rehabilitation in the ’80s:

“There’s naturally a continuity,” said Hu Jia, a prominent Beijing dissident who is the son of former Rightists. “My parents and their generation of Rightists had experiences and views that you would never find in the People’s Daily or a classroom, and many of them passed them down.”

Despite his vehement criticism of the Communist Party, Mr. Tie had nursed hopes that the current leader, Mr. Xi, would eventually use his growing power to lead China in a more liberal direction, a hope ridiculed by many other dissidents, Mr. Hu said. But Mr. Tie’s detention was probably related to an essay he recently published denouncing Liu Yunshan, Mr. Xi’s trusted subordinate in charge of ideology and propaganda, Ms. Ren said.

[…] Mr. Tie made a living in journalism and public relations, and in recent years devoted himself to publishing books and pamphlets of memoirs of other former Rightists and people persecuted under Mao. Such memoirs are banned in China, but Mr. Tie’s dozens of books and booklets, cheaply printed and unadorned, circulated among friends, former Rightists and historians, an antidote to the party’s silence about Mao’s misdeeds. [Source]