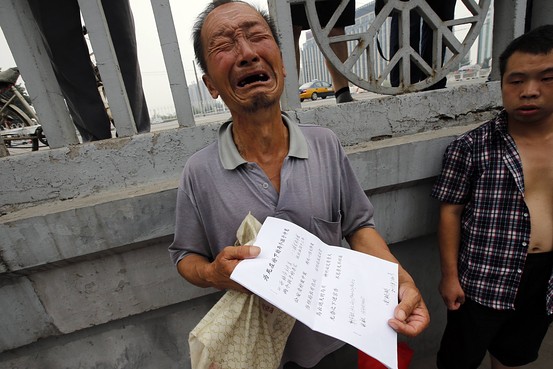 Beginning on October 1st, China’s highest court will be offering petitioners the option to vent their grievances via video chats with officials. China Real Time reports:

The court will begin adopting such video-style hearings for petitioners on Oct. 1, the country’s National Day, according to state news agency Xinhua. Under the new system, petitioners will be able to apply for chats with Supreme People’s Court judges at local courts closer to home.

Qian Xiaochen, assistant presiding judge at the Supreme People’s Court, told the agency that videotaping the interactions would make court officials be more careful in their behavior, and also make it easier for the highest court to supervise such interactions.

[…] “With the traditional style of petitioning, the highest court often didn’t understand the local dialects, and accordingly had trouble understanding the accounts of the person involved,” Ms. Qian told Xinhua. “But if we receive petitioners by video, the local court personnel can help play a ‘translation’ role and smooth communication.” [Source]

Meanwhile, a guerrilla theater group in Beijing is offering marginalized migrant workers the stage to engage in public performances and use theater as a means to empowerment. Matt Sheehan at Huffington Post reports:

“Theater can come to play a political role when you stand up as a person requesting to be recognized, rather than having your dignity trampled upon,” said Mo Shucao, organizer and co-director of “Art is Hard Work,” a theater event that took place in August. “It’s about building up this collective identity as workers.”

[…] The event known as “Art is Hard Work,” a collaboration between the New Workers’ Art Collective and several other groups, consisted of a collection of short plays depicting the struggles of China’s migrant laborers. Most of the skits were inspired by the workers’ own experiences living on the margins of China’s gleaming metropolises. The actors came from Beijing organizations serving migrant workers, domestic helpers and migrant children. Onstage, they portrayed maids suffering at the hands of tyrannical housewives and migrant workers confronting miserly factory owners. [Source]