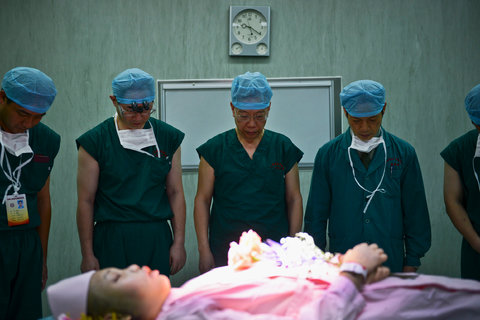 China’s harvesting of organs from executed prisoners has long been the target of human rights and international health organizations. In response, in 2012, officials with the Ministry of Health announced that the practice would be phased out. The government has now announced plans for a January 1, 2015 deadline for ending the practice. Austin Ramzy reports for the New York Times:

Dr. Huang Jiefu, a surgeon in charge of revamping China’s organ transplant system, said at a conference in the southern city of Kunming on Wednesday that the number of voluntary organ donors had risen quickly over the past year, but was still quite low, The Southern Metropolis Daily reported. As a result, China will face extreme pressure in providing suitable organs for the estimated 1.5 million people awaiting transplants.

Dr. Huang said that so far this year, organs had been collected from 1,500 people who had previously agreed to be donors upon their deaths. In the previous three years combined, there were only 1,448 voluntary donors.

By comparison, last year in the United States, with a much smaller population, 14,256 people donated organs, including 8,268 deceased donors and 5,988 living donors, according to the Department of Health and Human Services. [Source]

With the low rates of voluntary organ donation, doctors have long relied on organs from prisoners to complete transplants, but will now have to find other sources. From Olivia Geng and Laurie Burkitt at the Wall Street Journal:

“This is the only way to go,” said Zhao Hongtao, an assistant to Huang Jiefu, director of China’s Human Organ Donation and Transplantation Committee. Mr. Zhao said the directive issued on Wednesday was aimed at hospitals, which harvest the organs and play a key role in the trade.

Officials have previously said that China depended for years on executed prisoners as its main source of organ supply for ailing citizens. About 65% of transplants in China use organs from deceased donors, over 90% of whom were executed prisoners, according to a 2011 paper co-written by Mr. Huang in the medical journal Lancet. The paper said China is the only country that systematically uses organs from executed prisoners. [Source]

Read more about organ transplants in China, via CDT.