Historical Drama Shows Too Much Cleavage for Censors 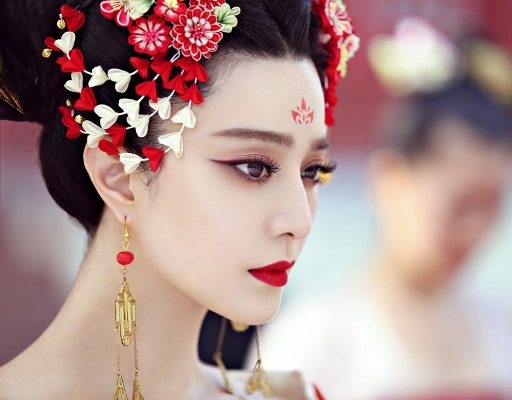 At The New York Times, Amy Qin reports that a popular historical television drama about China’s first female emperor has been suspended shortly after its December premier, prompting speculation that the show’s revealing costumes may have provoked censors.

When the highly anticipated television show “The Empress of China” was abruptly pulled from Chinese airwaves just days after its premiere on Dec. 21, many speculated that the reason might have had less to do with technical problems, as the show’s producers claimed on its official microblog account, than with one aspect of the show that was, well, impossible to miss: the plunging necklines and tightly squeezed bosoms.

That speculation was confirmed on Thursday evening when the show, a palace drama set in the Tang dynasty (A.D. 618-907) and featuring the actress Fan Bingbing, who also had roles in the Hollywood films “X-Men: Days of Future Past” and “Iron Man 3”, resumed. Although the story line appeared to have been unaltered, it was clear that the show’s aesthetic had undergone a major transformation. The ample chests that once filled television screens were suddenly nowhere to be seen.

[…] Revealing décolletage is only the latest target to come into the cross hairs of China’s entertainment censors. In the past, the regulator cracked down on television shows that depicted time travel (thought to “lack positive thoughts and meaning”), adultery and one-night stands, and, most recently, wordplay and puns, which are thought to be “contradictory in spirit to the continuation and enhancement of outstanding traditional Chinese culture,” according to regulators.

[…] Speaking after the cancellation of the talent show, a spokesman for the television station said it would be replacing the show with programs that promoted healthy morals, public safety and “practical information about housework.” [Source]