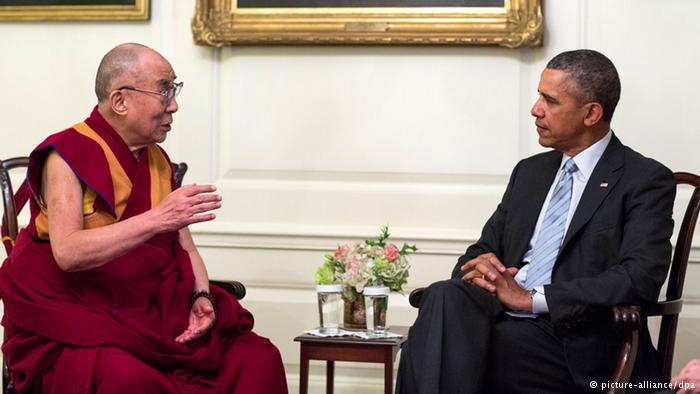 The Washington Post’s David Nakamura reports on the “awkward Washington-Beijing two-step” surrounding the Dalai Lama’s attendance at Thursday’s National Prayer Breakfast in Washington. Its announcement last week brought a swift rebuke from China’s foreign ministry that China is “opposed to any country’s leader meeting with the Dalai Lama in any manner,” while state media denounced the invitation as “a political gimmick.”

The Dalai Lama is not a head of state and he formally gave up his political role in Tibet’s exile government three years ago. But his appearance at the National Prayer Breakfast, where Obama will deliver an address about religious freedom, has already drawn sharp objections from Chinese leaders who oppose meetings between the religious leader and politicians.

[…] The machinations surrounding the Dalai Lama’s visit illustrate his unique standing as a global icon. Perhaps no other person who is not a head of state forces the White House into such contortions — simultaneously embracing him as a symbol of democratic values and keeping him at a remove because of his status as a political lightning rod.

By comparison, Obama literally kissed Aung San Suu Kyi, Burma’s democracy icon, during a visit to that country in November.

“The president’s desire, and probably need, to meet with the Dalai Lama is a function of U.S. domestic politics and a desire in the White House to be seen standing up for human rights,” said Bonnie Glaser, an Asia expert at the Center for Strategic and International Studies. “But they do understand we have to be careful with our relations with China.” [Source]

In an interview at Deutsche Welle, Columbia University’s Robert Barnett told Gabriel Domínguez that the occasion constituted “a diplomatic rebuff” for Beijing, but added that the risk of raising false hope in Tibet may be greater than that of damage to U.S.-China relations.

No-one knows whether or not Beijing will or will not move towards serious talks with the Dalai Lama in the future, or if western support will make this outcome more likely or less.

Could this meeting have any repercussions for Tibetans?

There are some observers who feel that the involvement of the Western powers in the Tibetan issue exacerbates tensions in Tibet and leads to more repressive and defensive polices by China. Others argue that China will not make concessions to Tibetans without foreign pressure. But that pressure is seen as provocative by many people in China, probably the vast majority. So this argument is unresolved.

There is also a thesis put forward by some Western scholars, and by some Tibetans too, that symbolic gestures of foreign support are counter-productive or even damaging. News of the event this week will be relayed into Tibet by Tibetan-language and Chinese-language radio stations in the US and Europe, so people will know about it and many will quietly celebrate it.

But, according to this argument, this risks leading some Tibetans in Tibet to believe that Western support is significant and practical – although it is clear to outsiders that it is only moral or symbolic. […]

How is the meeting likely to affect Sino-US ties?

It will lead to some tensions, but these are likely to be very minor and short-lived – these two powers have far too much at stake to risk serious damage accruing from this issue. […] [Source]

As Beijing continues efforts to undermine the Dalai Lama’s influence abroad, it looks set to step up its fight against it within Tibet. Authorities recently announced rewards of up to $48,000 for tips on terrorist attacks in Tibet, but as Shannon Tiezzi notes at The Diplomat, the definition of terrorism enshrined in China’s draft anti-terror law is ominously expansive:

[… W]hile there have been a number of violent terrorist attacks in Xinjiang within the last year, Reuters reports that “there is little indication that any such attacks have occurred in Tibet.” However, China’s draft anti-terrorism law features an extraordinarily broad definition of terrorism, one that includes not only violent attacks but also “thought [or] speech” that aims to “subvert state power” or “split the state.”

That new definition has implication for Tibet. China has repeatedly denounced the Dalai Lama, the exiled spiritual leader, as a “splittist,” arguing that his talk of a “middle way” and increased Tibetan autonomy is merely code for outright Tibetan independence. Chinese authorities have vowed to crack down on officials within Tibet that “follow the 14th Dalai Lama to split the country, break ethnic unity, participate in illegal organizations and activities, and spread reactionary opinions.”

Beijing also accuses the Dalai Lama of encouraging violence (including self-immolations by Tibetan monks) even while publicly embracing a message of non-violence. Last summer, Chinese media directly accused the Dalai Lama of inciting “hatred, terror, and extremist action” through the Kalachakra ceremony. [Source]

Read more on the draft anti-terror law from Human Rights Watch via CDT.

Meanwhile, the Dalai Lama’s political successor Lobsang Sangay finds himself overshadowed by the spiritual leader and shunned by both the Chinese and other governments. From Isaac Stone Fish at Foreign Policy:

[…] The closest Sangay said he came to meeting a head of state was an encounter around 2007 at Harvard with Ma Ying-jeou, who later became the president of Taiwan — an island claimed by China, that only 21 nations still recognize as an independent country. Sangay said he has not met any heads of state: “We don’t even try; it’s too sensitive for them.”

[…] Sangay says that his policy on dealing with Beijing is the same as that of the previous Tibetan governments-in-exile. Rather than seeking independence, or making do with the status quo, the Dalai Lama in 1974 conceived of a policy known as the Middle Way Approach. It calls for “genuine autonomy” for Tibetans living in China, and allows Beijing to maintain “the security and territorial integrity of the motherland.” Samphel of the Tibet Policy Institute, who thinks Sangay is “doing a wonderful job,” admits that there’s little the prime minister can do. “Whether China thinks it’s within its interests to engage with him or not, that’s for China to decide. But at the moment, it seems that they don’t want anything to do with him.” [Source]