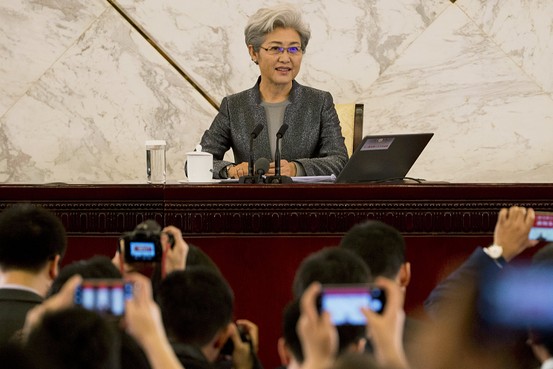 At China Real Time, Olivia Geng reports that a number of Chinese journalists covering the Two Sessions meetings have allowed the representatives they interviewed to edit their stories, compromising sound journalistic practices and sparking discussions on independence and freedom of the press.

“Reporters, particularly reporters at the ‘Two Meetings,’ need to stop acting like favored concubines and put themselves on an equal footing with the people they’re interviewing,” ran a scathing commentary published by the Tencent news portal earlier this week.

[…] In the second notebook, posted to Xinhua’s website on Saturday, reporter Wu Yu offered a blow-by-blow account of cornering well-known actor and CPPCC representative Chen Daoming on as he emerged from Beijing’s Kuntai Hotel. Mr. Chen was unfailingly polite, dutifully answering questions and even shaking Ms. Wu’s hand, the reporter wrote. Moved by the celebrity’s earnestness, she promised to run the story by him before putting it out then tracked him down the next day to make good on the vow, even though it meant running her story later than others.

[…] The reporters’ notes have sparked wide-ranging discussion in a country where the already limited space for independent journalism has recently begun to shrink even further. Following street protests over censorship at the respected Southern Weekly newspaper in the southern city of Guangzhou in early 2013, Chinese President Xi Jinping has tightened the screws on the news media with more restrictive propaganda orders and requirements that all journalist undergo Marxist training. Authorities have also moved to tame social media by detaining influential users and issuing a string of restrictive rulesto limit what users can post online.

Against that background, seeing Chinese journalists flaunt a servile attitude rubbed many the wrong way. [Source]

On Twitter, AFP’s Felicia Sonmez highlighted an alternative take by Global Times’ Yu Jincui on the media environment surrounding the Two Sessions and what it takes to be a reporter at one of China’s most prominent political events of the year.

China’s two sessions, convene over 5,000 lawmakers and political advisors every year. As China’s most important political convention, it’s not only a platform to discuss and navigate China’s development, but also a battlefield for the media with more than 3,100 Chinese and foreign reporters covering the event.

[…] I was taught by experienced reporters to dress up in brightly colored suit, such as red, yellow and pink to attract the spokesperson’s attention. However, being an elegant lady and putting up hands quietly could hardly bring you luck by itself, especially when you face competitors who resort to other cunning tactics such as waving brilliantly colored scarves or stepping on the seats or bringing ladders to make themselves conspicuous.

[…] On the day of the International Women’s Day, some female reporters reportedly successfully questioned some ministers using the excuse that they deserved an interview chance as a holiday gift. [Source]

China currently ranks 176th out of 180 countries in the Reporters Without Borders 2015 World Press Freedom Index.