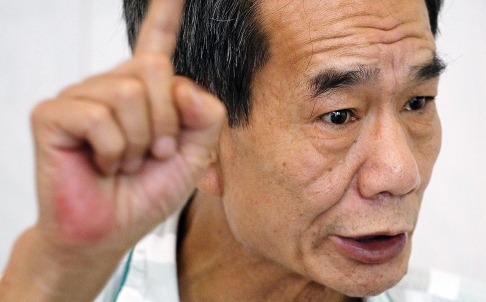 Ou Shaokun, a Guangzhou-based anti-corruption activist known for his work campaigning against officials misuse of government issued vehicles, was placed under detention in Changsha, Hunan for five days last week under prostitution allegations. Just prior to his detention, Ou had posted photos showing an official SUV from Guangzhou on unofficial business in the neighboring province. After supporters speculated that Ou was detained in retaliation for his activism, the South China Morning Post reports that he has denied the allegations, and said that his televised confession was both coerced and taken out of context:

He then allowed in a young woman who had been singing with them [at a karaoke bar], the report said.

She used the bathroom to take a shower and then undressed herself.

Ou said they had started kissing when police raided the room and started taking photographs.

“We did not have sex and I did not pay any money, so it does not constitute prostitution,” Ou was quoted as saying.

[…] Changsha TV station’s politics and law channel reported on March 29 that Ou had admitted the offence and aired video footage in which he apologised to his supporters.

He said he had refused to be interviewed by the news channel at first, but agreed after a police officer threatened to upload surveillance video in the hotel room online.

Ou said his comments saying he had been wrongly detained were edited out. [Source]

The SCMP also notes that Ou is planning on suing the Changsha police.