Li Tingting: “My Belief Is Firmer” After Detention 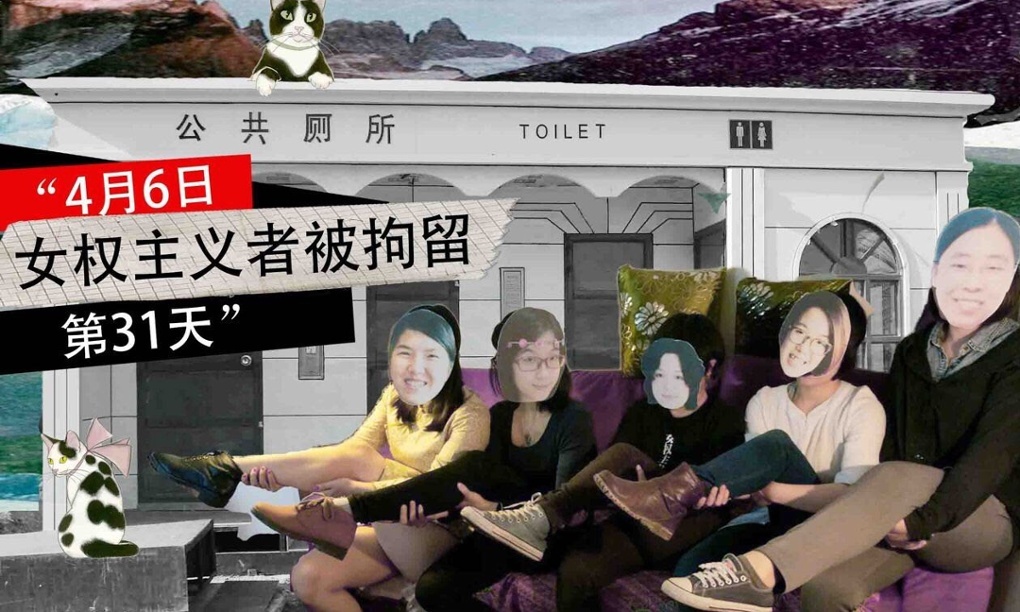 Following their release after five weeks in detention, the feminist activists Wu Rongrong, Zheng Churan, Li Tingting, Wei Tingting, and Wang Man have remained under tight surveillance as their case continues to be investigated. Two of the activists have spoken to the media, either indirectly or anonymously to avoid violating restrictions on receiving interviews. AP interviewed the girlfriend of Li Tingting, who goes by the name Teresa:

“‘Feminism is my soul,'” Teresa quoted Li as saying. “‘I thought a lot and came to believe what I do cannot be wrong. My belief is firmer. Feminism will surely be inseparable from me.'”

[…] AP reporters traveled to Li’s home village of Hongtongying, a community of wheat fields and willow trees on Beijing’s outskirts, but were trailed by unidentified vehicles. In a nearby town center, the journalists were able to see Li with Teresa as they walked arm-in-arm from a tea house to a hospital, but could not interview Li. Her friend and the lawyer said Li would abide by state security officials’ demands that she grant no interviews. They also released a written statement by Li, in which she pleaded innocence.

“What I have done does not provoke trouble, but is mild advocacy that does not amount to any crime,” Li wrote. “I demand police dismiss the case immediately, remove coercive restrictions on me and return innocence to me.”

[…] “The activism by Li Tingting not only complies with Chinese law, but should be lauded because she is promoting the law,” Wang said, referring to China’s law, policy and declarations championing equal rights for women. [Source]

Foreign Policy translated an article by fellow women’s rights activist, Zhao Sile, in which she interviews one of the released activists, who chooses to remain anonymous:

With the women detained, the police resorted to a common tactic utilized by Chinese authorities and propagandists to discredit domestic protest movements, most recently the Hong Kong protests in late 2014: They attempted to link the movement to foreign meddling in China’s domestic affairs. “The police suspected that ‘foreign forces’ instigated [my work] and questioned whether I had received money or compensation for my activities,” the released activist told me. But she adamantly denies this. “These charges are ridiculous. What we have done is aimed wholly at promoting gender equality or fighting sexual harassment.” When the police asked her why she would involve herself with this kind of activism, she told me, “I answered that I am also a victim of sexual harassment, and I care about the cause.” [Source]

One reason the five activists have become “influential advocates” is because their work has been enabled and expanded by the Internet. While online planning discussions between the activists were monitored, social media platforms have allowed disperse individuals to form coalitions to build support for their cause. Activist Zeng Jinyan writes in the Guardian:

The internet, though subject to powerful censorship, is providing these activists with a place to organise. Filtered social media platforms – such as WeChat and Weibo – are used for raising awareness with wider audiences in China, while discussions about strategy are moved to diverse encrypted mobile applications, such as Surespot. As one application becomes popular, and therefore risky, new non-mainstream platforms are introduced. The ability to connect virtually is fostering a sense of emotional affiliation within the community, as well as the ability to mobilise en masse.

[…] The broader movement of clued-up activists, to which these five belong, has taken university gender programmes and been exposed to the likes of the Vagina Monologues (local versions of which were put on in theatres in various Chinese cities through the 2000s). In this digital age, it is not as hard for ordinary people to access this kind of revolutionary information. [Source]

Authorities have attempted to restrict the online conversations about the detention of the five women by censoring search results on Weibo.

Read more about the so-called Feminist Five, via CDT.