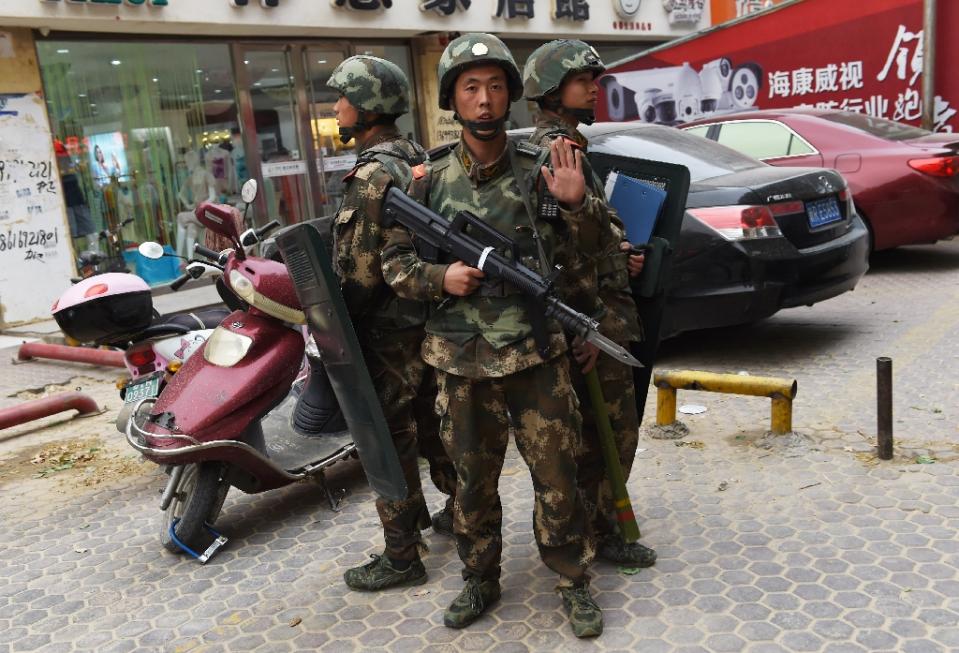 AFP’s Benjamin Haas reports from the Xinjiang village of Elishku or Shache, the scene of a violent confrontation last July. According to locals, the clash was sparked not by outside instigators, but by restrictions on religious practice.

Something hideously violent happened in Elishku. Whether it was a separatist attack or a civilian massacre is shrouded in the mists of conflict, control, claim and counter-claim that plague China’s mainly Muslim region of Xinjiang.

[…] Residents described more than 500 people, some carrying hoes, axes and other farm tools, marching down a dusty tree-lined road to meet a line of security personnel armed with assault rifles.

Mahmouti heard them ordering the crowd to “Step back”, and moments later, a stream of gunfire. The shooting continued intermittently for hours, he added.

“Anyone who went out that day never came back,” said Yusup, a farmer who did not want to give his last name for fear of reprisals. “It was chaos, maybe as many as 1,000 people vanished.”

[…] “If a crowd gathers in Beijing or Shanghai, the police would be careful about handling it and possibly allow some steam blowing,” said James Leibold, an expert in ethnic relations at La Trobe University in Australia.

Estimates of casualties from the incident varied wildly. Officials claimed that 37 civilians were killed, as well as 59 attackers; the pro-independence World Uyghur Congress initially suggested that the death toll was in the thousands, but soon revised this to hundreds.

At East Asia Forum, Leibold argues that China must look beyond carrots such as economic development and sticks like armed force and cultural repression:

For centuries the Chinese state has governed its distant ethnic frontiers with both carrot and stick. In the past, emperors proffered ‘imperial grace’ (ēn) for those ‘barbarians’ willing to submit (at least nominally) to Chinese dominion, while reserving the right of ‘imperial might’ (wēi) for those who resisted. The ēn/wēi stratagem continues in the People’s Republic of China (PRC) today. But recent unrest in the Tibetan Autonomous Region, the Xinjiang Uyghur Autonomous Region and elsewhere reminds us of the inherent limits of these tactics of paternalistic co-option and repression.

[…] In managing these ‘ethnic contradictions’, the ruling Chinese Communist Party (CCP) relies on the same carrot and stick tactics as previous Chinese regimes: co-opting minority elites, encouraging and monitoring compliance at the grassroots level while eradicating pockets of resistance with brute force.

[…] In sum, the Chinese party-state expends considerable resources in an effort to engineer ‘ethnic harmony’. Its authoritarian controls, ironically, attenuates ethnic contradictions in the short term, even if they erupt from time to time. Yet the lack of genuine openness, equality and grassroots community building forestalls the conditions required for a robust, inclusive and enduring ethnic pluralism. [Source]

In another article, meanwhile, Haas reports “an Orwellian atmosphere” in Elishku, where loudspeakers now broadcast a constant stream of looped propaganda messages:

The slogans are loudest in the township bazaar, the centre of commerce and social life, but are even audible as farmers toil in the fields.

One message describes the “Seven Behaviours of a Religious Extremist” as including “quitting drinking and smoking, or refusing to drink with friends” and “refusing to open restaurants or shops during Ramadan”, a common practice across the Islamic world.

The Uighur-language lecture, read in a confident male voice, also promises rewards of up to 200,000 yuan ($32,000) – more than 40 times the average annual income – for actions ranging from “effectively preventing terrorist activities” to reporting on those “engaging in illegal religious behaviour”.

Villagers tolerate the constant drone and increased police presence, but say increased restrictions on movement are beginning to chip away at their livelihoods, preventing them seeking better prices for their crops elsewhere. [Source]

Read more on violence and religious restrictions in Xinjiang, via CDT.