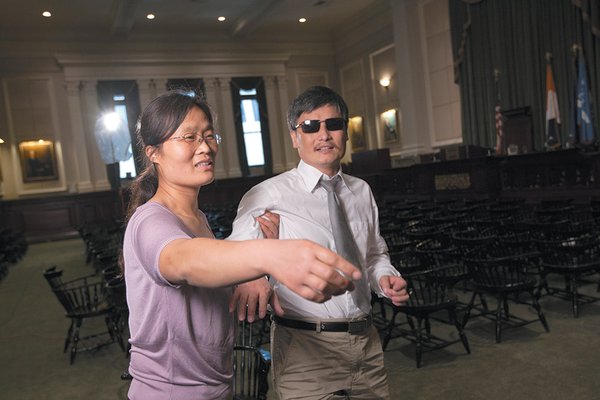 At The New York Review of Books, Evan Osnos discusses “The Barefoot Lawyer: A Blind Man’s Fight for Justice and Freedom in China” by Chen Guangcheng. Osnos describes Chen’s activism and long house arrest, his sensational escape, and his tangled career in the United States, and considers how Chen’s story relates to that of China as a whole:

I lived in China from 2005 to 2013 and watched Chen emerge as an activist. We spoke occasionally by phone and I wrote about his activities. For all of his audacity, and the sheer physical improbability of his story, I always regarded his experience as that of an outlier, with limited lessons for understanding China’s future. But The Barefoot Lawyer compels us to consider an alternative reading. The details of how, exactly, a man who might never have left the village of his birth came to see the need to confront the Chinese state says much about him but no less about his country. Chen may turn out to be less of an aberration in the political forces shaping modern China than an embodiment of them.

[…] One of the most common mistakes that outside observers make about China is assuming that ordinary Chinese people remain so focused on earning a living, so relieved to be free of Mao’s campaigns, that they have no desire to involve themselves in political questions. This was true enough a decade ago. But in today’s countryside, away from new skylines and new infrastructure, conversations almost inevitably turn to the frustration over corruption, petty tyranny, and the unfair distribution of opportunity. To presume that the Chinese people are as mesmerized by their nation’s economic transformation as foreigners are is to misjudge the mood as thoroughly as people misjudged Chen Guangcheng’s conception of an adequate life. A local official once visited him under house arrest, and Chen explained the violations of his rights, to which the official responded: “But you can’t see anyway…. As long as people give you enough to eat, what do you want with going out and doing things?” [Source]

At his Dart-Throwing Chimp blog last week, political scientist Jay Ulfelder also questioned established views of the relationship between prosperity and politics in China. He highlighted recent findings from the Brookings Institution that “unhappiness and reported mental health problems are highest among the cohorts who either have or are positioned to benefit from the transition and related growth—a clear progress paradox.”

These survey results contradict the “performance legitimacy” story that many observers use to explain how the Chinese Communist Party has managed to avoid significant revolutionary threats since 1989 (see here, for example). In that story, Chinese citizens choose not to demand political liberalization because they are satisfied with the government’s economic performance. In effect, they accept material gains in lieu of political voice.

[…] To me, this case further bares the specious logic behind most legitimacy-based explanations for political continuity. We believe that rebellion is an expression of popular dissatisfaction, a kind of referendum in the streets; we observe stability; so, we reason backwards from the absence of rebellion to the absence of dissatisfaction, sprinkle a little normative dust on it, and arrive at a positive concept called legitimacy. Formally, this is a fallacy of affirmative conclusion from a negative premise: happy citizens don’t rebel, no rebellion is occurring, therefore citizens must be happy. Informally, I think it’s a qualitative version of the “story time” process in which statistical modelers often indulge: get a surprising result, then make up a richer explanation for it that feels right. [Source]