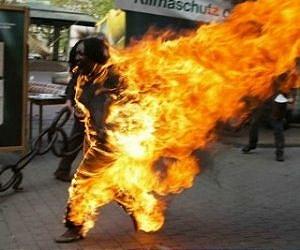 According to records kept by the International Campaign for Tibet, 142 Tibetans have self-immolated in protest of Beijing’s policies in Tibetan regions of China since 2009. The area hardest hit by this brand of protest has been Aba (Ngaba in Tibetan) in Sichuan Province, which has seen 41 self-immolations and a steady string of government crackdowns. In her latest report for the Los Angeles Times’ “Tibet’s Road Ahead” series, Barbara Demick reports on the recent history of the long defiant region. The report contains quotations from Aba locals on resounding political anxiety, the reemergence of Tibetan identity, and one resident suggesting that the self-immolations to have been at least mildly successful in winning government redress:

The town is composed of one long road, officially Route 302, although Tibetans now call it the “Martyr Road.” It is lined on both sides with red-metal shuttered storefronts — tea shops, shoe stores, businesses selling cellphones. Tibetan men wear long cloaks over their jeans; the women favor ankle-length skirts and floppy hats, with glossy black braids that cascade down their backs, and an occasional flash of coral jewelry.

[…] After any self-immolation or protest, Aba is transformed into a military garrison. Checkpoints seal off travel in and out of town. Out come the security forces: the People’s Liberation Army and the Chinese paramilitary forces known as wujing in khaki uniforms, the SWAT teams in black and the regular police in blue.

[…] One result of the recent turmoil has been growing self-awareness of Tibetan identity. Unable to directly confront the Chinese, Tibetans have begun low-key initiatives to preserve their language, clothing and Buddhist traditions.

[…] Said another Tibetan woman, Lhamo, a semi-literate homemaker in her 30s: “I don’t approve of self-immolation, but I have to admit we are getting more from the government. The self-immolators did make sacrifices to improve our lives.”

Still, she said many of her neighbors remain desperately poor. [Source]