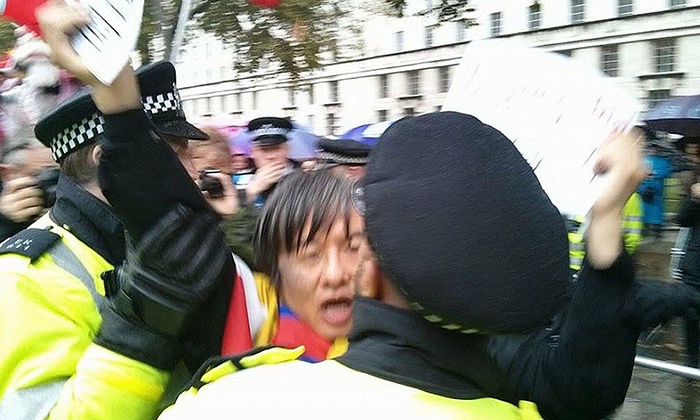 Shao Jiang, a veteran of the 1989 Tiananmen protests, has filed an official complaint with the UK’s Independent Police Complaints Commission over his arrest during protests against Xi Jinping’s state visit in October. He and two other protesters were later released without charge. Shao was forcibly removed from the path of the visiting president’s motorcade, but argues that subsequent police actions seemed more focused on shielding Xi from embarrassment than from danger. The British government has recently faced widespread accusations of “kowtowing” to China in the hope of securing economic benefits. From Damien Gayle at The Guardian:

The complaint by Shao Jiang alleges police acted unlawfully by arresting him, detaining him, denying him a phone call, raiding his home and banning him from any further protest against Xi Jinping’s state visit on 21 October.

[…] Shao and his wife, Johanna Zhang, also have questions about what happened when their computers were seized by police. Officers claim they were not accessed, but before they were returned Shao received an alert from Google saying state-backed hackers may be trying to access his emails or computer.

[…] Shao and his lawyers want the IPCC to investigate whether any plans were put in place to crack down on protests and dissent in the run-up to Xi’s arrival in the UK, possibly in collusion with Chinese authorities. “The actions of any senior officer in drawing up and implementing such plans for that purpose would plainly be unlawful,” Shao’s complaint states. [Source]

Shao has previously accused British police of double standards in their treatment of pro-China demonstrators and human rights protesters. The issue also arose in Parliament, where MP Tim Loughton asked on October 22nd:

In the UK, our democracy is built on the principle of free speech, so can the Minister tell me why protesters in the Mall exercising their right to draw attention to human rights abuses in Tibet were this week corralled behind barricades at the back while Chinese state-sponsored cheerleaders were given “Love China” T-shirts, Chinese diplomatic bags and a prime position at the front? [Source]