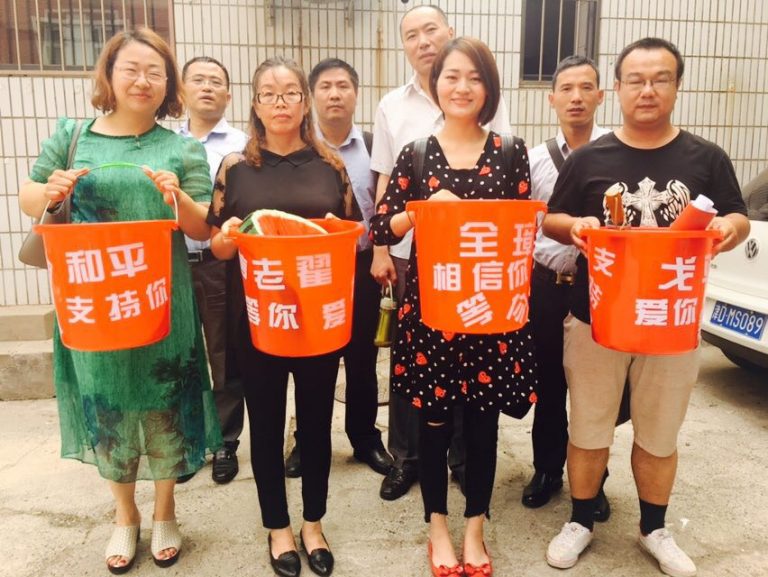 Families of detained Chinese human rights lawyers continue to speak out nearly one year after authorities rounded up their loved ones along with approximately 300 others in a sweeping crackdown on the country’s legal profession. The Guardian has posted profiles of 16 who remain in custody. The newspaper’s Tom Phillips examines the personal toll that the crackdown has had on the lawyers’ children and other relatives, with a look at how life has altered for kids like Li Jiamei, the daughter of Christian rights lawyer Li Heping:

When classmates asked the Chinese schoolgirl who she had come to the Halloween fancy dress party as, she had an immediate reply.

[… Columbia University’s Andrew] Nathan said the offensive against government critics and independent thinkers was paying off for the Communist party.

“People get the message. They are shutting up. They are being more careful. And those who have been the most active are struggling with their personal lives – they are either in jail or have lost their job or been fired from their law firm and so forth.”

But the spouses of China’s missing lawyers are refusing to go quietly.

“If someone attacks you, you’re not just going to just stand there and let them beat you, are you?” said Li Wenzu [wife of imprisoned lawyer Wang Quanzhang], who has also continued to speak out in defiance of threats from security officials.

Li confessed she had even started to enjoy the thrill of being constantly trailed by government spies and finding ways to shake them off. “Right now, life is colourful,” she said with an uneasy grin. [Source]

Li was among several of the detained lawyers’ wives and legal representatives who were taken into custody earlier this week after demonstrating outside a court in Tianjin. All eight were released after twenty-four hours. Others have also refused to be silenced: on Monday, a group of more than 50 legal professionals openly denounced the Tianjin police for prohibiting family-assigned counsel from speaking to the detained lawyers. From Koel Chu at HKFP:

The statement asserts that family-assigned counsel have been denied access to meetings with their clients at the detention centres where they are being held, as the Tianjin police claimed that the arrested lawyers had already entrusted other people to be their defence representatives. The statement also said the police have assigned defence lawyers, whose identities were concealed from the arrested lawyers’ family members, and these assigned counsel have never reported back to the families.

“In our opinion, the practice of the Tianjin police has trampled upon the principle of justice that humanity has evolved, the basic human rights of defendants, as well as the existing domestic laws,” it read. [Source]

During our last encounter, Li, calm and thoughtful as ever, told me he believed China’s government was losing the trust of the people. More and more people were victims of injustice. And fewer and fewer people could see injustice being corrected. The government would seek to destroy even his own small informal anti-torture organisation, Li predicted, as they saw it as a challenge to their monopoly on power.

Li Heping is one of China’s top human rights lawyers, a man who dedicated his life to standing up for the weak and disenfranchised. The son of farmers, he rose from rural poverty to become one of the leading lights of his country’s ‘rights defence’ movement.

But years of legal activism transformed Li, a committed Christian and father-of-two, into an enemy of the state. As a Chinese security agent once told him, in the eyes of Beijing Li had become “more dangerous than Bin Laden”.

[…] Li’s fate, and that of the many notable lawyers who’ve accompanied him into this limbo – including his 24-year-old female assistant Zhao Wei – is the most striking evidence yet that China’s top leaders are abandoning a peaceful path to a rule of law society where a constitution, law and lawyers can protect the most basic freedoms denied China’s citizens. [Source]

In another sign of defiant solidarity, 1,000 Chinese lawyers signed a statement this month denouncing the police assault of a fellow lawyer in court. The Guangxi court has since been ordered to apologize. From SCMP’s Mimi Lau:

The lawyer, Wu Liangshu, says he was beaten by three court policemen in the presence of two judges and one other official on Friday after his request to file a case in a district court in Nanning, Guangxi, was rejected.

The clash broke out when Wu refused to hand over his mobile phone for inspection by Qingxiu district court police. Wu had used the phone to record a conversation with court officials in its petition office.

“The refusal to establish a court case and the violent assault and search of a lawyer seriously damage the rights of attorneys. If even a professional lawyer is treated with barbaric and violent means, just imagine how they deal with civilians,” said the lawyers’ statement, posted online on Sunday evening.

“The act of the court takes the nation’s justice system as a joke and this is not the first time lawyers have been assaulted but we will not give up this time and we will press ahead,” it said. [Source]

A photo of Wu standing outside the courthouse in badly torn clothing after the encounter has been widely circulated:

BBC’s Stephen McDonell reports the incident has generated widespread attention online, with certain discussions of the case censored on Chinese social media. Beijing’s attempt to force judges and lawyers to toe the party line has forced many to leave the profession out of desperation.