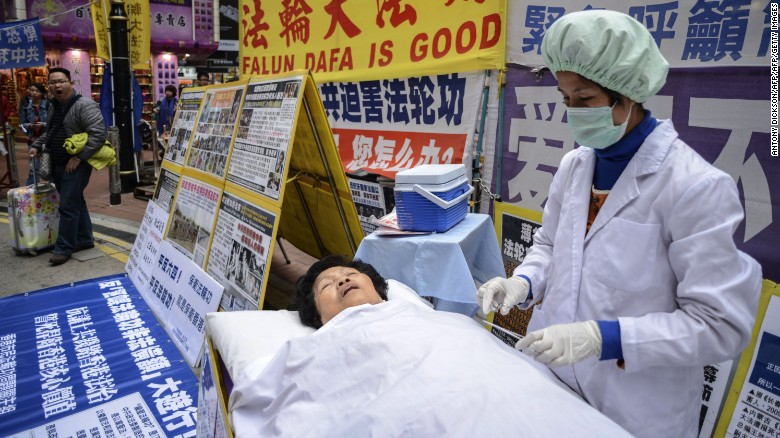 A new report by former Canadian politician David Kilgour, human rights lawyer David Matas, and journalist Ethan Gutmann claims that hospitals in China are harvesting organs on a scale that far exceeds the official estimates given by government authorities. Nathan Vanderklippe at The Globe and Mail reports:

Chinese hospitals are conducting far more organ-transplant operations than the country has officially acknowledged, according to a lengthy new report that raises troubling questions about the source of human body parts used to heal China’s elite and the foreigners who pay high prices to receive new kidneys and livers.

Although much of China’s transplant industry is shrouded in secrecy, officials have said 146 approved hospitals transplanted 7,785 organs last year.

But a team of researchers, including two prominent Canadian human-rights activists, has sifted through a huge number of hospital records, accounts from doctors, press clippings and public statements to tabulate numbers of Chinese transplant-centre beds and doctors – and from that has calculated how many transplants take place.

By their count, Chinese surgeons are transplanting between 60,000 and 100,000 organs a year, a number they say far surpasses the volume of kidneys, livers and hearts available from voluntary donors. [Source]

CNN’s James Griffiths has more on the sources researchers used in the study to make their claim:

“Simply by adding up a handful of the hospitals that have been profiled in this (report), it’s easy to come up with higher annual transplant volume figures than 10,000,” the authors write.

According to official statistics, there are more than 100 hospitals in China approved to carry out organ transplant operations. But the report states the authors have “verified and confirmed 712 hospitals which carry out liver and kidney transplants,” and claims the number of actual transplants could be hundreds of thousands larger than China reports. [Source]

According to the authors, the gap in government transplant figures is largely filled by prisoners, some political, many of whom are allegedly executed in secret to have their organs harvested for transplant purposes. Falun Gong practitioners, underground Christians, and ethnic minorities are primary targets, Quartz’s Josh Horwitz reports:

The researchers argue that the Chinese government is sourcing organs from executed prisoners in order to meet demand from hospitals, which rely on transplants to generate revenue. […]

The report cites interviews with detained individuals that claim political prisoners are routinely given blood tests that other prisoners are not, in an effort to ensure their organs remain healthy enough to be transferred to another individual.

“In detention centres, Falun Gong practitioners are frequently given blood tests and medical examinations, while other prisoners (with the exception of Uyghurs, Tibetans and certain House Christian groups who were also targeted) receive no such treatment,” the report reads.

The research that the report is based on isn’t from entirely unbiased sources. Kilgour, Matas, and Guntmann say they relied on researchers from the Falun Gong group for some of the report’s findings. The Falun Gong is a quasi-religious organization that has continuously been critical of China’s Communist Party and has been subject to suppression. Assessing the reliability of the group’s claims of abuse has been notoriously difficult, as most of the information about it comes from either the group itself or the Chinese government—both entities with inherent biases. [Source]

David Matas and David Kilgour discussed the organ harvesting trade in China at TEDxMünchen in 2015:

The report’s findings stand in stark contrast to Beijing’s promise to end the practice of harvesting the organs of executed prisoners by 2017. The findings also diverge from a claim made by China’s former deputy health minister Huang Jiefu, who denied accusations that China’s organ transplant system allowed organs to be procured from involuntary prisoners. China announced plans as early as 2014 to abolish organ donation from inmates. Related reports were subsequently controlled, with all online comments monitored.