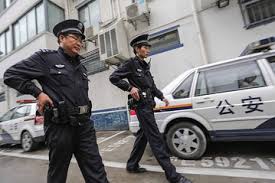 In response to a rising trend of hospital violence inflicted on doctors and medical staff by patients frustrated with a deteriorating quality and access to health care, a nationwide crackdown on medical-related violence was announced in May. Amid the crackdown, Beijing authorities released a circular this week calling for increased surveillance, and authorizing police to use weapons in preventing attacks. At Sixth Tone, Fan Yiying reports:

In an effort to reduce the frequent incidents of violence against doctors and other medical personnel, the Beijing municipal government reminded citizens on Monday that its police officers can use weapons when necessary, Sixth Tone’s sister publication The Paper reported.

[…] Hospital violence has long been a serious issue in China. A report released by the Chinese Medical Doctor Association last May revealed that nearly 60 percent of medical staff had experienced verbal abuse, and over 13 percent had been physically assaulted.

[…] Monday’s announcement also said the public areas, including outpatient facilities, of Beijing hospitals must be equipped with cameras and patrolled by security guards. When similar security measures were installed in a hospital in Hangzhou, eastern China, in July as part of the upcoming G-20 summit, many doctors around the country reacted by saying they wanted such protection in their hospitals, too. [Source]

The attacks have taken a toll on the profession. Faced with constant risks to their personal safety, morale among medical staff on the mainland has reached rock-bottom, and fewer high school graduates are choosing careers in medicine and health care.

[…] The judicial department, according to the circular, has been told not to delay dealing with cases involving attacks on medical staff or disturbing order at hospitals. The courts must not show leniency when delivering verdicts.

Hospitals should to pay special attention to “key groups of people”, including those who are drunk, are prone to make trouble or become violent, or have violent mental disorders. [Source]

Read more about hospital violence and health care in China, including a young doctor’s explanation of the pressures that drove him from continuing a medical career, see prior coverage via CDT.