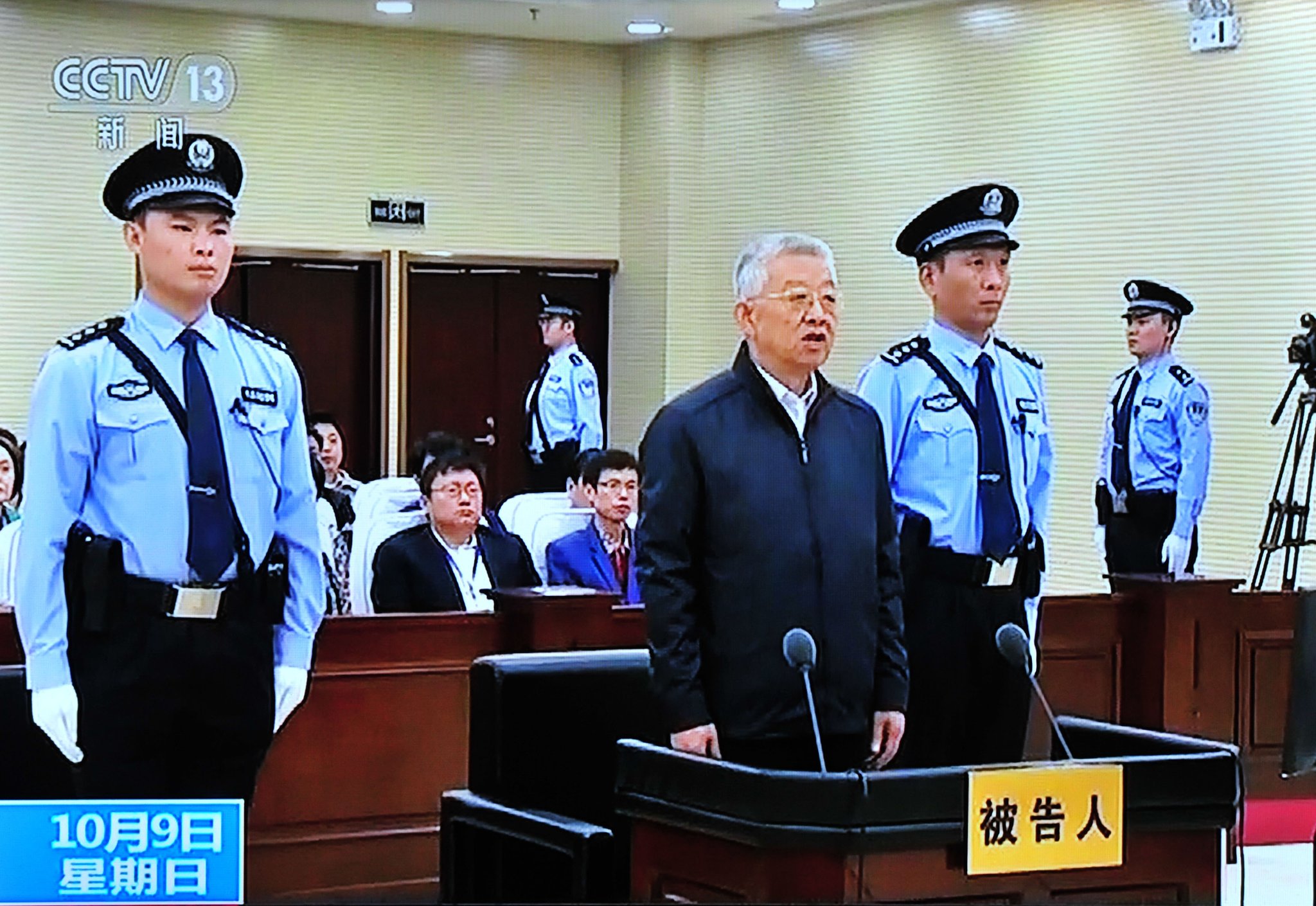 Countless corrupt Party officials–from powerful “tigers” to low level “flies”–have been purged since Chinese President Xi Jinping launched an extensive anti-corruption campaign nearly four years ago. Some of the major corruption cases are now being broadcasted across the country as part of a new eight-episode documentary series titled “Always on the Road.” Made jointly by the Publicity Department of the Central Commission for Discipline Inspection and China Central Television, the series is scheduled to air daily until the start of the sixth Central Committee plenary session next week. Chris Buckley at The New York Times reports:

Feasts of crocodile tail. Pricey liquor by the bucketful. A nanny employed just to take care of pets. Bundles of jade bracelets worth millions. A free trip to the World Cup in Brazil.

[…] The documentary series, actually titled “Always on the Road,” has been shown on state television this week to emphasize that President Xi Jinping is serious about wiping out graft. Some of China’s most notorious fallen officials are shown repenting on camera, warning of the misery that comes from dirty wealth and imprisonment.

“I became possessed and lost my head,” says Bai Enpei, a former Communist Party secretary of Yunnan Province, in southwest China, who was given a death sentence with a reprieve for taking bribes of nearly $38 million. “I lost my ideals and had no higher aspirations, and I violated a bottom line of humanity.”

[…] The Communist Party is promoting the series to set the mood for a leaders’meeting starting on Monday that will lay down more stringent rules for members and officials. In many areas, they have been ordered to watch the show. And its hero is undoubtedly Mr. Xi, the only nondisgraced leader to be featured. He is described as spartan, humble and happy with a simple diet.

[…] But viewers of Chinese television already get to see plenty of Mr. Xi in each news broadcast. For them, the main interest in the series has been the sight of once-mighty officials humbled and imprisoned. [Source]

The first episode featured dramatic scenes that included footage of $31 million worth of cash hidden in an empty apartment owned by former energy chief Wei Pengyuan. Another official named Zhou Benshun appeared on the program recounting his illegal dealings with businessmen and developers in exchange for bribes, which enabled him to live in an 800-square-meter house complete with chefs and maids. In another scene, the son of disgraced Jiangxi Party Secretary Su Rong was shown condemning his father in a rare act among family members not seen since the Cultural Revolution. Of all the officials in the series, Xi Jinping is the only one depicted in a positive light. The show portrays him as a virtuous leader leading a simple lifestyle worthy of emulation.

In addition to these scenes, several high-level officials, including former Sichuan Party Secretary Li Chuncheng, were shown publicly repenting and admitting their guilt during the program. These confessions bear an uncanny resemblance to a series of forced guilty pleas made by lawyers and activists who were detained as part of the “Black Friday” crackdown on China’s legal profession in 2015. According to some observers, these confessions serve to highlight Xi’s resolve to fight corruption as well as discourage incumbents from challenging Xi’s agenda. Eva Li at South China Morning Post reports:

[…] Li Chuncheng, a former party deputy secretary in Sichuan province serving a 13-year sentence and a close aide to disgraced security tsar Zhou Yongkang, burst into tears during an interview segment of the programme.

Li said he regretted his greed and the fact that “everyone’s life is a live broadcast, and there’s no way to live it again”.

[…] Zhang Ming, a political science professor at Renmin University in Beijing, said public humiliation of senior officials was part of the Cultural Revolution days, and that the televised confessions showed some similarities to those times.

“It sends a warning shot to those who are still in office,” said Zhu from the Chinese Academy of Governance. [Source]

At Global Times, Liu Xin writes that the confessions are also meant to “build momentum” for the Party ahead of the sixth plenary session, which will focus on strengthening party discipline among other things.

“Compared with past education materials on anti-corruption, this documentary is more impressive. Introspection from these corrupt officials could serve as a warning as well as a reminder to all officials and Party members to abide by the Party discipline,” Fu Siming, a professor from the Party School of the Central Committee of the Communist Party of China, told the Global Times.

Fu said that the CPC has also shown its resolve in cracking down on corruption, stressing that the campaign is “always on the road” and will never turn back.

“The documentary also adds momentum to the upcoming sixth plenary session of the 18th Central Committee. It serves as a link between the past and future:  it summarizes the achievements against corruption since 2012 and highlights the Party’s future efforts on comprehensively strengthening Party discipline,” Zhuang Deshui, deputy director of the Research Center for Government Integrity-Building at Peking University, told the Global Times.

The sixth plenary session is scheduled to be held from October 24 to 27. A work report will be submitted to the CPC Central Committee by the Political Bureau at the plenary session. It will also review key issues affecting the comprehensive and strict management of the Party, a draft on the norms of intra-Party political life, and amendments to an intra-Party supervision regulation. [Source]