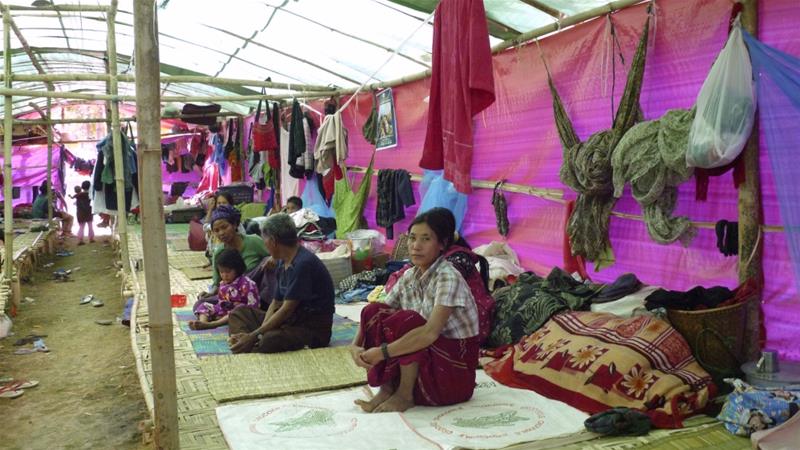 The incident occurred in the country’s northern Kachin State on Wednesday, where fighting between the Burmese military and an ethnic armed group has displaced 23,000 people since the outbreak of the conflict several weeks ago, campaign group Fortify Rights said.

“China should provide asylum seekers with sanctuary, not send them into the line of fire,” said Matthew Smith, chief executive officer of Fortify Rights.

The organisation also said that Myanmar authorities were restricting humanitarian aid groups from operating in the affected region.

The restrictions were resulting in “avoidable deprivations of food, healthcare, and other humanitarian provisions for displaced communities,” Fortify Rights said. [Source]

Myanmar’s Kachin State has been besieged by conflict since 2011 after government troops broke a longstanding ceasefire agreement. Hundreds of thousands of civilians have been displaced since then. RFA has more on the plight of the refugees:

Samson Hkalam, General Secretary of the Kachin Baptist Convention, a Myanmar Baptist denominational organization that assists refugees in the northern state, said the internal refugees from the Zai Awng and Hkau Shau camps are still on the road with no place to stay.

They are afraid to return to their internal refugee camps near which mortar shells have exploded from fighting between government troops and ethnic armed soldiers from the autonomy-seeking Kachin Independence Army (KIA), he told RFA’s Myanmar Service.

The KBC, which has its headquarters in the state capital Myitkyina, will discuss these refugees’ plight with officials from the Kachin state government as well as with Chinese authorities, he said.

A Joint Strategy Team (JST) for Humanitarian Response in Kachin and Northern Shan States, which was formed by nine Kachin civil society organizations, including the KBC, to support the internally displaced persons (IDPs), released a statement on Wednesday saying that most of those who left the camps are women, children, and the elderly, who don’t have enough food. [Source]

Hostilities between the military and the ethnic rebel group have continued to escalate, with heavy shelling claiming the lives of dozens of civilians in affected areas. AFP reports:

Clashes between the army and ethnic minority militias in Myanmar’s borderlands have intensified in recent months, undercutting Aung San Suu Kyi’s vow to bring peace to the country since her party took power in March.

Dozens have been killed and thousands displaced since fresh fighting erupted between the Myanmar military and the ethnic minority Kachin Independence Army (KIA) in November.

The unrest has rippled across Shan and Kachin states, threatening the next round of peace talks between the government, military and ethnic groups scheduled for February.

Dashi Naw Lawn, secretary of the Kachin Network Development Foundation, said the army launched airstrikes near the border town of Laiza on Tuesday.

[…] “The fighting is getting worse and worse.” [Source]

Other ASEAN countries and China have responded to the conflict in Myanmar and the resulting human rights abuses with acquiescence. At Forbes, Anders Corr looks at why these countries have not have applied diplomatic pressure to moderate Myanmar’s behaviour, arguing that these foreign governments have upheld a “principle of noninterference” out of fear of establishing an unfavourable precedent that could lead to Western intervention in their own domestic human rights situations.

The Asian diplomatic source to whom I spoke, alleges that China and most ASEAN countries are largely ignoring the Rohingya crisis, or supporting Myanmar behind the scenes, because they do not want to set a precedent for outside interference in domestic human rights issues. Such a precedent could then be used against them on human rights violations against their own minorities. Additionally, China sees human rights complaints as a potential avenue for U.S. influence in Asia, according to the source. China and most of the ASEAN countries have their own minorities that are discriminated against, or worse. China’s worst-treated minorities are in Xinjiang and Tibet, and precedents on the Rohingya are avoided in part to protect Chinese policies in those provinces. According to my source,

Not taking a position is in [the] national interest of many countries. As for people of Chinese descent in Kachin and Shan, China may be quietly telling Myanmar that they would like to see people of Chinese descent to be considered better than now. At [the] same time, China has a different approach altogether [towards the Rohingya]. It is mostly silent. But, there is a dilemma. In [the] name of calling for treating minorities better, it may end up creating more space for Westerners to play a bigger role in Myanmar. [China] may link it to strategic considerations. China, like other countries, has its own problem with minorities. If Myanmar minorities were supported then the same could be expected for minorities in China.

The source applied the same logic to ASEAN countries as a whole. “ASEAN has followed the principle of noninterference in member states,” he said. “They are not taking a position on the Rohingya because that suits them. Indonesia has [a] similar problem with some of its ethnic [minorities]. Malaysia has its own problem with a local Chinese community…. Thailand has Muslims in the South and some [people of Chinese origin] in the North. Vietnam has the same problem.” [Source]

Elsewhere, Antoni Slodkowski and Yimou Lee report that China has been quietly extending its political reach into Myanmar via the unrecognized state of Wa, also known as Special Region 2, through establishing a large Chinese presence in both the Wa government and business communities.

The “foreign policy” of the self-proclaimed Wa State is closely monitored by Beijing, senior officials in the administration run by the 30,000-strong United Wa State Army (UWSA) and its political wing said, with contact with Western governments, businesses or aid groups deemed particularly sensitive.

[…] “China has its ears and eyes everywhere, including in the government and business, and is wary of any deepening of ties with the West,” said one minister from the Wa government, speaking on condition of anonymity due the sensitivity of the matter.

“We take this very seriously, and act so as not to anger China,” he said, adding that all dealings with Washington and Brussels, as well as every foreigner or NGO entering Wa territory, were scrupulously reported to China.

China’s Ministry of Foreign Affairs said in response to a question from Reuters that “as a friendly neighbor” it has “consistently respected Myanmar’s sovereignty and territorial integrity, and not interfered with Myanmar’s internal affairs”. [Source]