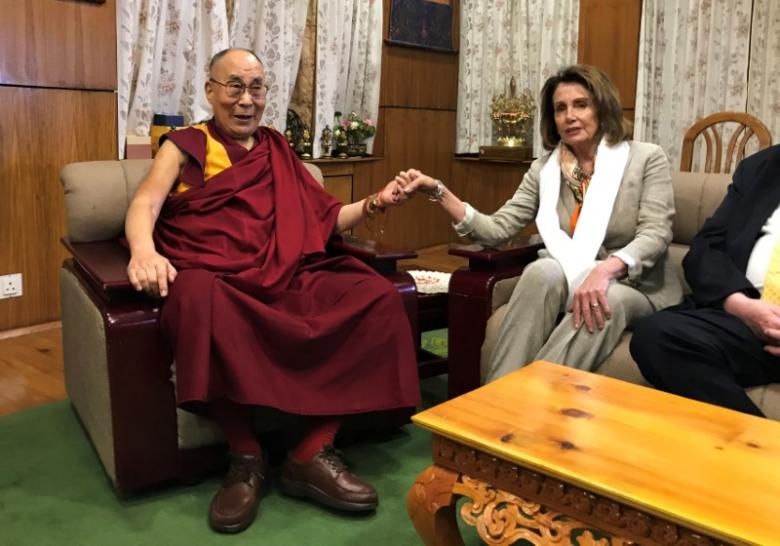 A bipartisan U.S. Congressional delegation led by House Minority Leader Nancy Pelosi visited the Dalai Lama in Dharamsala, India this week. The visit drew sharp criticism from Beijing, where a Foreign Ministry spokesperson urged the American lawmakers to cease contact with the exiled spiritual leader and use caution when dealing with issues related to Tibet. Christian Shepherd at Reuters report:

House Democratic Leader Nancy Pelosi flew with a bipartisan delegation to the Himalayan hill town where the 81-year-old Buddhist leader is based, seeking to draw world attention to human rights in Tibet as President Donald Trump eyes warmer ties with China.

[…] “The visit by the relevant delegates of the U.S. Congress to meet the Dalai Lama sent a very wrong signal to the world about Tibet independence and goes against the United States’ promises on Tibet. China firmly opposes this and has lodged solemn representations with the U.S.,” Geng told a daily news briefing.

“We urge relevant congress people in the U.S. to carefully handle the Tibet issue, stop all communications with the Dalai Lama and take immediate measures to deal with the negative impact of the visit.”

The U.S. lawmakers’ visit comes at a awkward time for Trump. Campaigning for election, he had cast China as a trade adversary and currency manipulator, but he now wants President Xi Jinping’s support to restrain nuclear-armed North Korea. [Source]

The visit was arranged to draw attention to the deteriorating human rights condition in Tibet. From Reuter’s Douglas Busvine:

“As we visit His Holiness the Dalai Lama, our bipartisan delegation comes in his spirit of faith and peace. We come on this visit to be inspired by His Holiness and demonstrate our commitment to the Tibetan people, to their faith, their culture and their language,” Pelosi said.

[…] Pelosi last visited the Dalai Lama in 2008, in the aftermath of a Chinese crackdown on an uprising in Tibet that coincided with the Beijing Olympics.

The situation in the Tibet Autonomous Region has worsened since then, according to experts and human rights activists, as authorities crack down on dissent and pursue systematic policies to assimilate Tibetans.

Pelosi voiced her support for the Tibetan community and denounced China for using its economic clout to silence Tibetans’ call for freedom and justice. Katy Daigle and Ashwini Bhatia at The Sacramento Bee report:

“You will not be silenced,” said Pelosi, a California Democrat. “The brutal tactics of the Chinese government to erase race, culture and language of Tibetan people challenges the conscience of the world. We will meet that challenge.”

[…] In many cases, China has offered aid packages to foreign governments on the condition that they support China’s position on issues such as Tibet and Taiwan, the self-governing island that Beijing has pledged to take control of, by force if necessary. Mongolia said in December that it would no longer allow visits by the Dalai Lama after a recent trip by the exiled Tibetan spiritual leader led China to suspend talks on a major loan.

“China uses its economic leverage to silence the voices of friends of Tibet,” Pelosi said Wednesday. “But if we don’t speak out against repression in Tibet and the rest of China because of China’s economic power, we lose all moral authority to talk about human rights anywhere else in the world.” [Source]

16-year-old Tibetan teenager Chakdor Kyab set himself on fire earlier this month in an act of protest against Chinese rule. He is the latest of more than 140 Tibetans to die from self-immolation since the first wave of protests began in 2009. Local authorities have since restricted the boy’s family from holding prayers and hosting visits from relatives. Kunsang Tenzin and Dawa Dolma at RFA report:

Authorities in northwestern China’s Gansu province have imposed restrictions on the family of a Tibetan self-immolation protester, preventing them from holding prayer services and blocking visits by relatives and friends, a source in the region says.

The move has upset and distressed the parents of Chagdor Kyab, a 16-year-old student who set himself ablaze on May 2 in Gansu’s Bora township in a challenge to Beijing’s rule in Tibetan areas, a resident of the area told RFA’s Tibetan Service.

“Chinese police have moved away from the site of the self-immolation itself, making it seem that things have returned to normal,” RFA’s source said, speaking on condition of anonymity. “But security personnel and other officials have now gone to Chagdor Kyab’s family home, causing them much inconvenience.”

“Authorities are not allowing the family to invite monks to perform religious rituals for Chagdor Kyab, and they are also preventing friends and other people from the village from visiting the family [to offer their condolences],” he said. [Source]