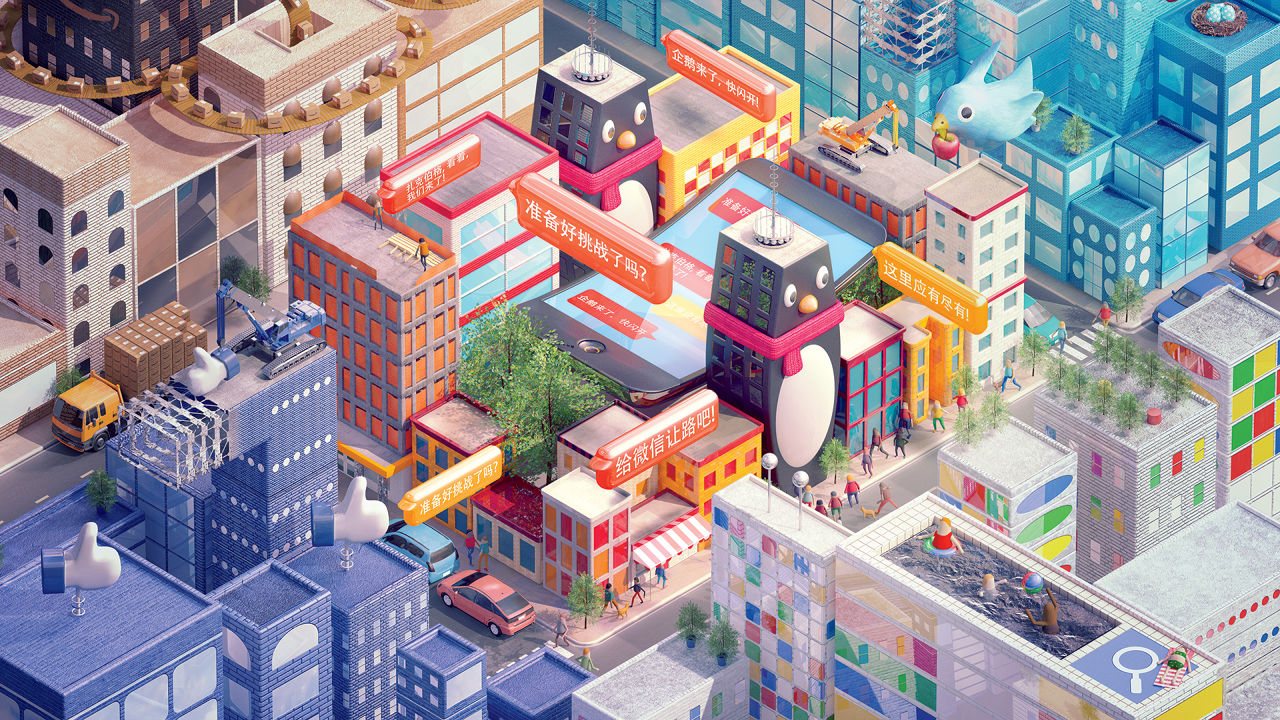 Chinese information technology giant Tencent Holdings Limited has broadened the pool of users that can now access its social credit scoring feature, Tencent Credit. The social credit system is a state-sponsored effort to score Chinese citizens based on their financial and behavioral data, yielding numbers that are meant to represent both how financially responsible and how “trustworthy” people are. The scheme has prompted considerable concern about potential surveillance and political influence, particularly in conjunction with China’s rapid shift towards cashless payments. Writing in Quartz earlier this week, Josh Horwitz has noted that a small subset of the 861 million users of Tencent’s messaging application QQ can view scores, ranging from 300 to 850 points.

At first glance, Tencent Credit bears similarities to its presumed rival, Sesame Credit. A social credit scoring feature bundled with Alipay (Alibaba’s mobile payment app), Sesame Credit grants scores between 350 and 950 points. The five dimensions of the Sesame Credit score are broken down into “users’ credit history, behavioral habits, ability to pay off debts, personal information, and social networks.” Although Tencent Credit scores are likewise divided into five components, there is one notable difference from Sesame Credit: the inclusion of a “safety index” (link in Chinese), which has yet to be described in further detail.

The timing of Tencent’s decision to extend user access to its social credit services has been an issue of interest in Chinese and Western media. April Ma of Caixin explains Tencent’s choice to roll out this feature two years after Sesame Credit, which has over 450 million users, as consistent with the pattern in which Tencent often occupies a second-mover position once Alibaba has acted first in launching a new product. China Channel’s Matthew Brennan has pointed out that a shopping holiday coincided with the announcement that Tencent Credit would become available to a host of new users. Tech industry watchers have observed that Tencent has much ground to cover if it aims to achieve the ubiquity of Sesame Credit, which has partnered with a host of third-party services to provide users with deposit waivers on bike sharing and hotel room rentals, among other perks.

Aside from questions of growing competition, the timing is additionally complicated by the People’s Bank of China’s announcement that it will not grant official licenses to the eight private companies, including Tencent, it originally permitted to conduct social credit pilot testing. Reuters’ Cate Cadell and Shu Zhang reported last month on the PBoC’s finding that none of the companies met its requirements:

Two people familiar with the process told Reuters that the central bank – which in 2015 allowed eight firms including Alibaba’s Ant Financial and Tencent Holdings to develop scoring systems – has quietly pulled back its support.

[…]”Clearly there’s a conflict of interest and that’s something the PBOC has realised,” said one of the people, adding the bank felt none of the eight firms was entirely suitable. “They’re not going to stand up and publicly admit they made a mistake; the only power they have is to basically not grant the licenses, which is what they’ve done.”

[…] in a closed-door seminar in April, Wan Cunzhi, head of the PBOC’s Credit Information System Bureau, said there was currently a “major conflict of interest” – potentially the first acknowledgement of concern outside internal circles.

“Their corporate governance structures don’t have third party credit independence,” he said, referring to the eight companies, according to a transcript of the speech seen by Reuters and confirmed by a person who attended the seminar. [Source]

That Tencent Credit is advancing in spite of this may signal cautious optimism about the future of privately-run social credit scoring services. Lucy Hornby of The Financial Times wrote early last month that the central bank may be flexible regarding future cooperation:

The PBoC is leaving open the possibility that the companies piloting the rating schemes could merge their credit scoring arms into an industry association, spin them off or find external partners, a government official said.

[…]“I don’t see this as something the government will give up and they certainly don’t want Alibaba and Tencent to grow more powerful than they are now,” said Anne Stevenson-Yang, head of J-Capital Research.

“They want [consumers] to have a unique identifier and a single social credit record, so that would have to be managed by a government agency.” [Source]

If the continued progress of its social credit scheme bodes well for Tencent, reports on Friday that the Cyberspace Administration of China will investigate its flagship WeChat service, as well as Weibo and Baidu Tieba, are less encouraging. The services are accused of hosting content “including violence, fabrication and rumor, obscenity and pornography, and other information shared by users that harms national security, public safety and social order.” Tencent stock dipped 5% after the news broke.