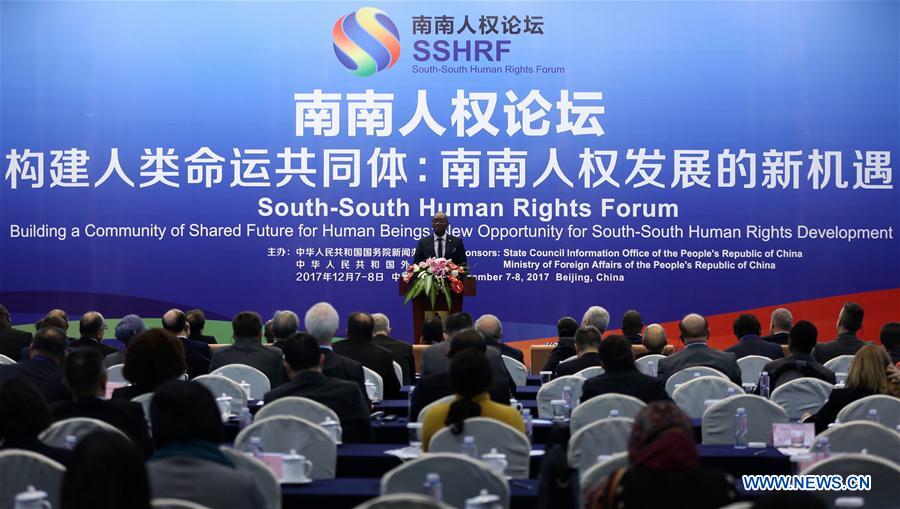 The European Union delegation to China issued a statement on Friday ahead of International Human Rights Day expressing deep concerns regarding the outlook for human rights in the country. From AFP:

The EU noted “significant improvements in the Chinese people’s standard of living and in access to social services such as health and education,” according to a statement on its website.

“However … during the past year, we have been deeply troubled by the deterioration of the situation with respect to freedom of information and freedom of expression and association, including with respect to online activity,” it said.

[…] The EU delegation also said it regrets the death in detention in July of Nobel Peace Prize laureate Liu Xiaobo, and called for the release of imprisoned human rights defenders, including lawyer Jiang Tianyong and Uighur scholar Ilham Tohti.

[…] The delegation’s statement was not formally endorsed by all 28 EU member states, and there was no immediate response from Beijing. [Source]

The Chinese government has intensified its crackdown on civil society under President Xi Jinping. Hundreds of human rights lawyers and activists were targeted in 2015 in one of the most extensive assaults on rights advocates that the country has seen in recent years. In Hong Kong, the forced disappearance of five staff members of Causeway Bay Books in late 2015 shocked the city and raised fears of eroding human rights conditions in the former British colony. Repression in Xinjiang and Tibet continues as Chinese authorities ramp up efforts to curtail political activity and suppress all expressions of ethnic and religious identity.

At the inaugural South-South Human Rights Forum held in Beijing on Friday, China called for the protection of people’s right to development and laid out its own vision for human rights governance centred on growth and the reduction of poverty. In a letter sent to commemorate the opening of the forum, President Xi asked that the will of developing countries be respected when it comes to human rights development. From Xinhua:

[…] Xi said that human rights worldwide could not be achieved without the joint efforts of developing countries, which account for more than 80 percent of the world’s population. He stressed that human rights must and can only be promoted in light of specific national conditions and people’s needs.

“The Chinese people would like to work in concert with people in other developing countries and beyond to advance development through cooperation, promote human rights through development, and build a community with a shared future for human beings,” the message read. [Source]

“In the past few decades, this ‘China model’ has left behind countless people in China, victimized by breakneck growth at the expense of basic protection from discrimination, exploitation, and abuse of power,” CHRD said in a report issued ahead of Human Rights Day on Dec. 10.

It cited the mass evictions of thousands of migrant workers from their accommodation in Beijing, and widespread discrimination against ethnic minority and religious groups, people with HIV/AIDS or hepatitis, women, persons with disabilities, and LGBTQ groups.

“The path of China’s ‘success’ is littered with ruined lives,” the report said.

[…] “Beijing has always viewed human rights as the right to existence, but the most basic human rights have to do with the political and civil rights of citizens,” Liu told RFA. “That includes freedom of expression, association, and publication.”

[…] It warned that China’s foreign policy objective of becoming a “leading global power” means that it will seek to change world opinion about human rights, rather than to comply with it. [Source]

Meanwhile, Canadian Prime Minister Justin Trudeau pressed China’s leaders on a number of human rights issues, including Canada’s opposition to the death penalty and consular cases involving imprisoned Canadians, during his recent trip to the country that was intended to center on trade. Alex Ballingall at The Star reports:

The prime minister has been under pressure from human rights campaigners to push China’s senior-most leaders on the treatment of at least three Canadians who are jailed in the country. His apparent opposition to China’s use of the death penalty comes after Premier Li defended the practice during his visit to Ottawa last year.

Trudeau told reporters at a press conference Tuesday afternoon that his Liberal government in Ottawa can have such discussions with China because of its push for deeper links with the authoritarian state.

“We can have strong and frank discussions about issues that we see differently without endangering the positive relationship we have,” Trudeau said.

“Whenever I meet with world leaders, I bring up the issues of human rights. This is no exception. I brought them up last night — human rights and consular cases with Premier Li — and I will certainly be addressing those issues with President Xi.” [Source]

The breakdown of trade talks between the two countries has been attributed in large part to Trudeau’s push on matters of human rights and other non-trade issues. From Chris Fournier and Josh Wingrove at Bloomberg business:

“It’s a little unrealistic for Canada to use a ‘one-size-fits-all’ approach in trade talks with countries whose conditions and aspirations are greatly different,” said He Weiwen, deputy director of the Center for China and Globalization in Beijing and a former commerce ministry official. Both countries “have a positive attitude” toward a potential free trade deal, “however practicality needs to be applied when it comes down to actual negotiation.”
[…] The trip began in Beijing, where Trudeau and Chinese Premier Li Keqiang abruptly canceled a joint press conference Monday after they were unable to set a framework to launch formal trade negotiations. Talks continued throughout the week to no avail.

Trudeau is in uncharted territory. Canada wants a new class of trade agreement altogether — and that’s not something that China has experience with, according to Eva Busza, vice president of research at the Asia Pacific Foundation of Canada. “There’s probably going to have to be a lot more dialog around this and many other issues,” she said in an interview.

The prime minister spent the trip’s last day refining his globalist message and emphasizing his approach. “If we move forward with simply straight and classic trade deals that focus only on tariffs and barriers and don’t think about the impact it’s going to have on citizens and communities and people, then we are going to find ourselves in a world where protectionism and inward thinking is the only option,” Trudeau said Thursday at the Fortune Global Forum in the southern city of Guangzhou. [Source]