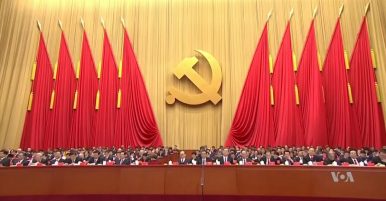 The anticipated establishment of the National Supervision Commission—a new “fourth branch” of government which will oversee and extend President Xi Jinping’s ongoing anti-corruption drive—is adding to long-running concerns about the rights of those under investigation. Suspects are currently held under shuanggui, or “dual designation,” a secret detention system overseen by the CCP’s Central Commission for Discipline Inspection that has long been criticized for the use of “torture and other ill-treatment including beatings, prolonged sleep deprivation, and being forced to stand or maintain uncomfortable positions for hours or even days,” according to Human Rights Watch. Last October at the 19th Party Congress, Xi announced that shuanggui would be abolished and replaced, but many are skeptical that this will end the abuses associated with it. HRW’s Sophie Richardson, for example, has commented that “putting a veneer of legality on an extra-legal detention system makes it no less abusive.” At Reuters, Christian Shepherd reports on concerns for suspects’ rights under the new system, which is expected to be approved at the “Two Sessions” top political meetings in Beijing next month:

In 2013, a Chinese court found five CCDI officials guilty of torture after they accidentally drowned a suspect while attempting to extract a confession.

Xi announced last October that under the supervision commission the “shuanggui” system would be replaced with a “liuzhi” or detention system.

The new law includes steps to prevent abuses, such as informing family members and employers shortly after a suspect is detained and required video recordings of interrogations, according to the most recent draft.

One potential change, for example, is the introduction of dedicated detention centers with video and sound recording equipment for use by only the commission, rather than using hotel rooms as was common under shuanggui.

But as the draft law stands, the system will have much in common with shuanggui and the failure to ensure suspects have access to a lawyer as soon as they are detained risks abuses, rights groups and some scholars say. [Source]

At The Diplomat, Mercy A. Kuo interviews China specialist and legal scholar Stanley Lubman, who describes the similarly extralegal liuzhi of the National Supervision Commission, the potential consequences of the incoming system for Chinese legal reforms and the standing of the judiciary, and the resounding related concerns from abroad:

[…] The new law provides for liuzhi (“detention in place” or “retention in custody”), extralegal detention not only for Party members but for any “public servants” who receive a salary from the government and who are investigated for “illegal and criminal misconduct.” Investigations are to be conducted by the Supervision Commissions; if criminal conduct is found, the person is to be handed over to the Procuratorate for prosecution. This procedure, like shanggui, is not subject to China’s Criminal Procedure Law.

[…] What are the consequences of the Chinese Community Party’s expanded powers over China’s judiciary?

After the draft law was published, a number of Chinese law professors expressed concerns. One professor, speaking at a meeting of legal scholars, declared that the powers of the Supervision Commission are “too broad, and it lacks official checks on its power.” Jiang Minggan, a well-known Beijing University law professor, was quoted as saying that ”limiting detainees’ access to legal counsel owed much to the extreme difficulty of collecting evidence in corruption cases.” Jiang added: “These cases are heavily dependent on the suspect’s confession. If he remains silent under the advice of a lawyer, it would be very hard to crack the case.” He also observed that because liuzhi “broadened the targets [and] of the anti-corruption crackdown,” it “fueled fears of future abuse.” At the same time, attempts are under way to regularize court procedures, even if they are treated as elements in an administrative hierarchy, rather than a judicial system like those in common law and civil law democracies

I do think that this recent change reflects, among other considerations, the Party’s paranoid fear of serious weakening by corruption and its deep commitment to control over Chinese society. […] [Source]

A translation of the draft supervision law is available at China Law Translate, whose editor Jeremy Daum has also offered some initial analysis. He describes the new system as “likely [to] integrate and codify some of the most questionable Party practices into the government system instead, applying them to a greater number of state employees.” At The Diplomat early this month, Charlotte Gao noted that despite the fact that the law has yet to be passed, provincial and municipal-level supervision commissions have already been appointed in several regions across China.

Last month at the Nikkei Asian Review, Katsuji Nakazawa reviewed measures in Xi’s anti-Party corruption drive, and described the campaign’s significant potential expansion and empowerment of an effective “fourth branch of government” following the expected passing of the supervision law:

Through the party’s Central Commission for Discipline Inspection, formerly headed by Wang Qishan, Xi has spent the past five years wielding his anti-corruption campaign against rival party factions. More than 1.4 million bureaucrats and others have been ensnared.

Now, by using the national supervisory commission, the crusade will be expanded to cover some 200 million people, including nonparty members, working in the public sector. Organizations affiliated with the national commission will also be set up at the national and local levels. It will be granted powers to clamp down on civil servants, workers at state-owned and other publicly owned enterprises, doctors, nurses, teachers, researchers, even cleaners at public institutions.

It will be, in effect, a fourth branch of government, along with legislative, executive and judicial powers, although these three existing powers are not separate as they might be in Western democracies. In China, the true power that counts is the Communist Party.

[…] The architect behind the plan to enshrine the commission in the constitution is seen to be Wang Qishan, Xi’s right-hand man and former anti-corruption czar. [Source]

According to Transparency International’s recently released Corruption Perceptions Index for 2017, China’s score improved slightly compared to the year prior. At The Washington Post, Dan Hough commented on changes to China’s score on the index since Xi launched his anticorruption drive in 2012: “China […] saw its score dip after the launch of Xi Jinping’s extensive anticorruption drive in 2012. Only now are we seeing China’s CPI score recover. This suggests that acknowledging and then fighting corruption can lead to worse scores rather than better ones, at least initially.”