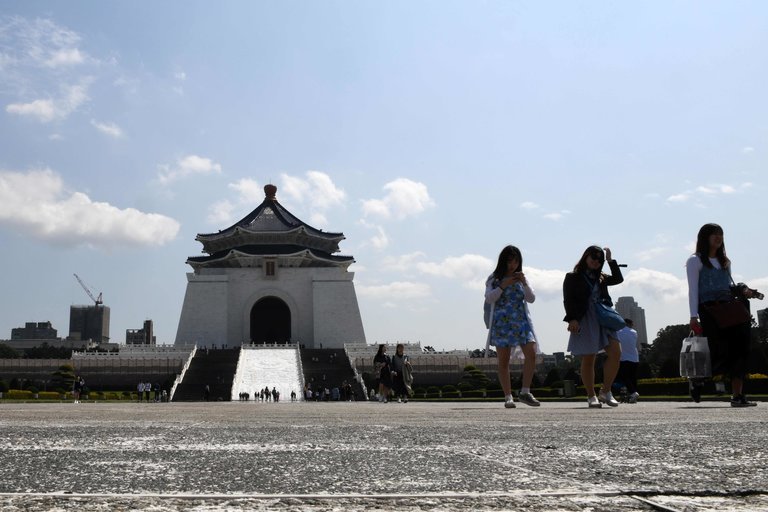 On Wednesday, anti-China Taiwanese protesters defaced the tomb of former Nationalist ruler Chiang Kai-shek at Cihu Mausoleum in Taoyuan City. The protest–which took place on the 71st anniversary of an uprising that ended in a Nationalist-led massacre where thousands were executed–is part of a call by younger Taiwanese for more say in their political identity. Chris Horton at The New York Times reports:

In past years, statues of Chiang have been defaced on the anniversary of what has become known as the 2/28 Incident — a public uprising that began on Feb. 28, 1947, and was crushed by Nationalist soldiers, who killed tens of thousands of Taiwanese.

While Chiang is still revered as a strong leader by some older residents, many in Taiwan oppose the use of his likeness or name in public spaces. Statues of Chiang, once ubiquitous in Taiwan, are gradually being moved to a park in Taoyuan. Many support the removal of Chiang’s likeness from Taiwan’s currency and of his name from roads and schools, as well as the repurposing of Chiang Kai-shek Memorial Hall, one of Taipei’s biggest tourist sites.

Mainland China’s ruling Communist Party has warned Taiwan against such “de-Chiang-ification.” They see it as an attempt to eradicate the Chinese identity that Chiang and the Nationalists, also known as the Kuomintang, imposed on Taiwan, which before their arrival in 1945 had been under Japanese colonial rule for 50 years. [Source]

On the same day, two former Taiwanese presidents Chen Shui-bian and Lee Teng-hui called for a referendum on Taiwan independence to be held in April 2019. A public vote on the issue would require an amendment to the Referendum Act because questions of sovereignty cannot be decided by a referendum under Taiwan’s constitution. Chen Shui-bian is currently on medical parole from a 20-year prison sentence for corruption. From Tom Grundy at Hong Kong Free Press:

Lee said a vote would be the “most powerful weapon” to ensure the island nation is respected as a “normal country,” with a new constitution, under the official name of Taiwan.

“I attended the press conference today as a concrete action to show my support for the referendum,” Lee told pro-independence supporters on Wednesday, according to the Central News Agency.

“Taiwan is our country, not China’s,” said Chen in a pre-recorded message. “We have to use our right to vote to show the world Taiwan’s will and determination that the country will never concede to the control of Communist Party of China.”

[…] Lawmakers, pro-independence groups and ex-vice president Annette Lu also attended the referendum campaign launch. The groups wish to see the country granted full participation at the United Nations along with a declaration of independence. [Source]

Meanwhile, the U.S. Senate passed a travel bill on Thursday aimed at promoting closer ties with Taiwan through senior official visits, eliciting an angry response from Beijing who claims that the bill violates the “one China” principle. Michael Martina and Patricia Zengerle at Reuters report:

“China is strongly dissatisfied with this and resolutely opposes it, and has already lodged stern representations with the U.S. side,” she told a daily news briefing.

[…] China urges the United States to cease official exchanges with Taiwan and“prudently and appropriately handle issues related to Taiwan to avoid seriously interfering with and damaging China-U.S. relations”, she said.

The Senate passed the Taiwan Travel Act by unanimous consent. It passed the House of Representatives in January, also without opposition. The legislation only needs Trump’s signature to become law.

The bill says it should be U.S. policy to allow officials at all levels to travel to Taiwan to meet their Taiwanese counterparts, permit high-level Taiwanese officials to enter the United States“under respectful conditions” and meet with U.S. officials, and encourage Taiwanese economic and cultural representatives to conduct business in the United States. [Source]

China has pursued a more hostile policy stance towards Taiwan since the 2016 election of Tsai Ing-wen from the pro-independence Democratic Progressive Party. As Beijing ramps up pressure on Taiwan, there are signs that the U.S. is beginning to push back. Keith Bradsher at The New York Times looks at two developments currently taking place that will serve to reinforce U.S. ties with Taiwan.

One is a luncheon and meeting in southern Taiwan in early May for a handful of executives from American military contractors and their Taiwanese counterparts. They will discuss a proposal by President Tsai to develop Taiwan’s components industry by selling more parts to military contractors, said Rupert Hammond-Chambers, the president of the United States-Taiwan Business Council, the host of the event.

The development was initially reported by Taiwanese, mainland Chinese and Hong Kong news media as a decision to move a big annual military contracting conference from the United States to Taiwan, potentially triggering a further chasm between Beijing and the United States. But the business council, which has organized the much larger event since its inception 16 years ago, has consistently held it in the United States and plans to keep doing so, Mr. Hammond-Chambers said.

The other event that could trigger Sino-American disagreement is expected in mid-June. That is when the American Institute in Taiwan is scheduled to open a new complex of elegantly designed buildings in Taipei, the capital, consolidating operations that are currently scattered among several dilapidated sites around the city. The institute is staffed mainly by State Department employees and local workers. [Source]

Jonathan Sullivan at the University of Nottingham’s China Policy Institute writes that resolving the outstanding Taiwan issue can be seen as part of President Xi Jinping’s vision for the rejuvenation of the Chinese nation.