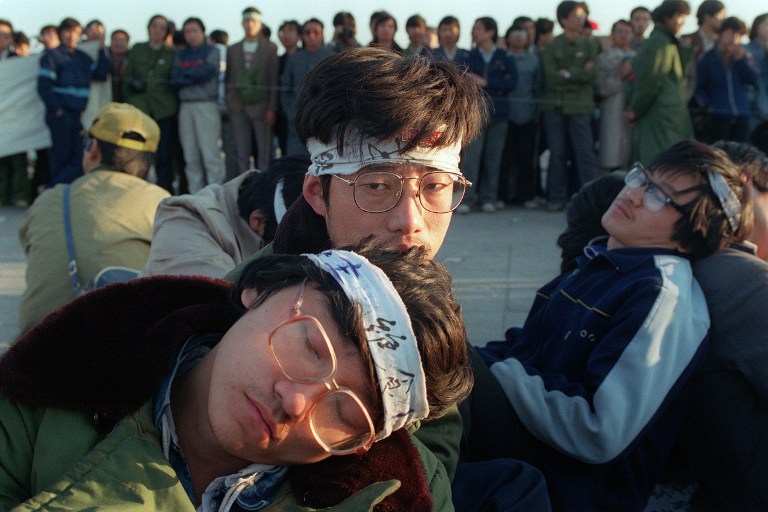 A defiant and enthusiastic crowd of more than 100,000 workers and students forced its way through police cordons in the capital today to demand more democracy, and smaller demonstrations were held in many other cities around China.

The occasion for the marches today was the 70th anniversary of famous nationalist demonstrations in Beijing that led to the May 4 Movement, which led a generation of Chinese intellectuals to seek a major re-examination of Chinese society. The movement also foreshadowed the rise of the Communist Party.

By far the largest demonstration outside Beijing was in Shanghai, China’s largest city, where the crowd suddenly swelled tonight to perhaps 20,000 or more, said a Western resident of the city who witnessed the march.

The flurry of demonstrations was among the largest in Communist China’s history, and in Beijing the protest appeared to draw record numbers of workers. [Source]

From another New York Times article on May 4:

Waving banners commemorating a similar demonstration 70 years earlier, thousands of university students marched through the capital this morning to press their demands for greater democracy.

The march followed the Government’s rejection Wednesday of the students’ conditions for formal talks to resolve their differences. Today, demonstrators shouted slogans criticizing the Government’s recent meeting with student leaders as a sham, and demanded that students themselves pick their representatives to meet with the authorities.

By the middle of the day, thousands of students had swept past police lines and into Tiananmen Square, the center of the capital, and policemen who had ringed it were unable to hold back the columns of marchers from at least eight universities and thousands of onlookers who also rushed to the square. Other student groups, including several from out-of-town schools, had yet to arrive at the square. [Source]