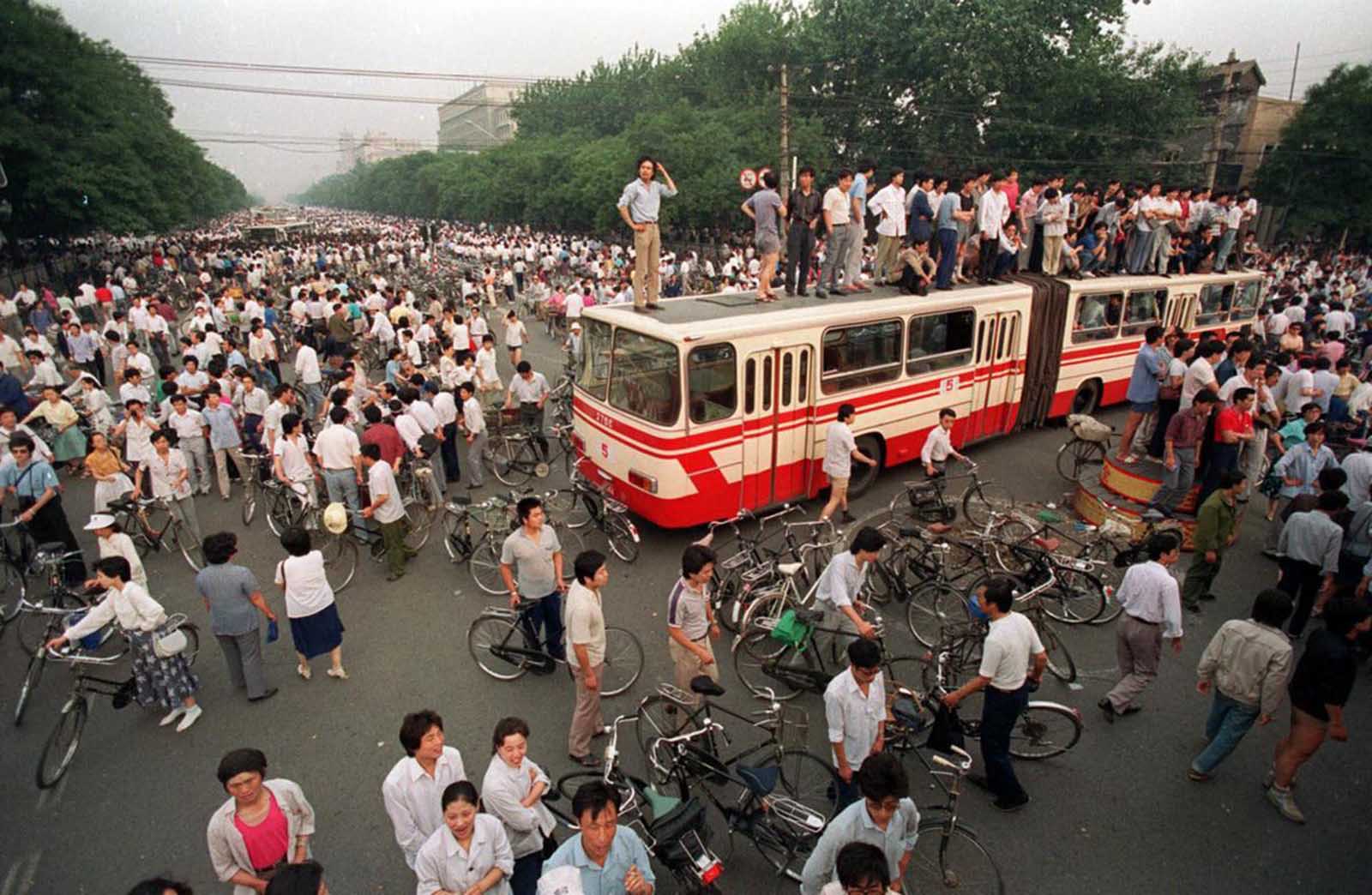 There was exhilaration as well as exhaustion on central Tiananmen Square as dawn broke this morning, for many of the tens of thousands of students occupying the square had earlier written their wills after widespread rumors that brutal repression would begin during the night.

While many still fear that there will be violence, there is a sense of triumph in the capital that ordinary citizens have been able to prevent the Government from carrying out martial law more than two days after Prime Minister Li Peng ordered it.

It is not clear why the troops have not moved more aggressively to put martial law into effect. Several knowledgeable Chinese said the army did indeed plan a crackdown on Sunday night, and there are growing suspicions that the army’s slowness has more to do with its own reluctance than with Prime Minister Li’s. [Source]

Students camping on Tiananmen Square pass the time with a lively dance on the morning of May 22 (via CND).

With their cameras shut down by Government decree, television news organizations struggled to keep information flowing from Beijing over the weekend, sometimes at the risk of violating orders from Chinese officials.

”We’re doing a lot of work over the telephone and keeping our fingers crossed,” Eason Jordan, the acting international editor of the Cable News Network, said yesterday in an interview from the CNN headquarters in Atlanta. Bernard Shaw of CNN is the last American television anchor to remain in Beijing. He will stay there, along with five other CNN correspondents, at least until tomorrow, Mr. Jordan said. Dan Rather, anchor of ”The CBS Evening News” and the only other news anchor in Beijing, returned to New York over the weekend after on-air confrontations with Chinese officials Friday night. Three CBS News correspondents remain in Beijing. [Source]

From an interview with Orville Schell from the PBS documentary Tank Man:

For 15 days following the declaration of martial law, the army was kept at bay. It never reached the square until the night of June 3 and 4. You were there in the early days of it. How did the citizens, largely the citizens, keep the army at bay?

When the army first came in, the citizens simply swarmed, but they swarmed somewhat fearfully, and they were very, almost innocent, as if the righteousness of their cause would be sufficient to stop this military force. And indeed it was. So you got these very curious situations where in some cases citizens would harangue the military, but very quickly they would be sympathizing with them, feeding them, sort of begging them to come over to the virtuous side from the dark side. … [Source]

See also, “Yearnings of Youth: An Old Pattern“, and “The 8 Disparate Decision Makers: Will They Be Able to Restore Calm?“, from the New York Times, and “Communism Confronts Its Children” from Time (paywalled).