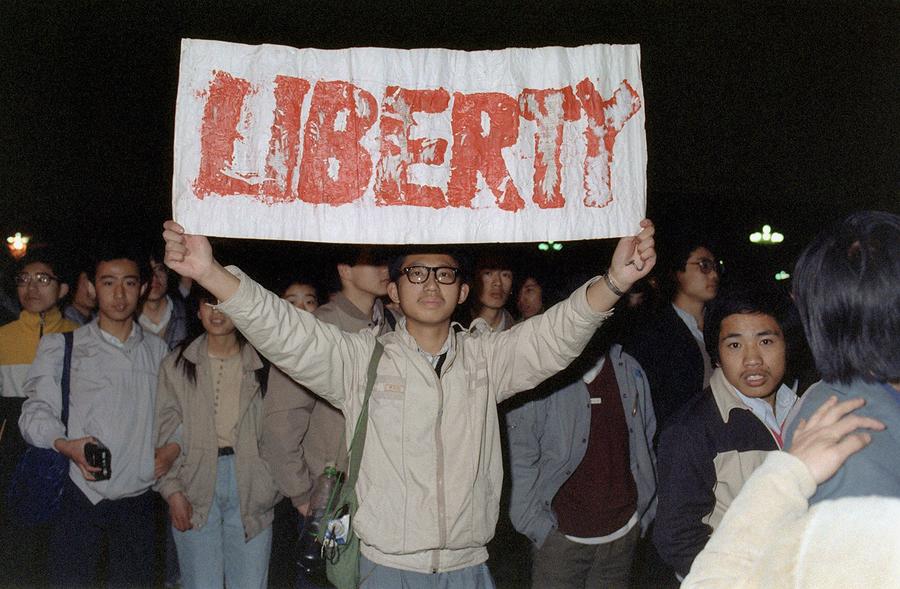 About 100,000 people on foot and on bicycles streamed through the capital today to demand more democracy and the resignation of Prime Minister Li Peng. The police and soldiers made no move to interfere despite martial law restrictions and the Government’s strict warnings against demonstrations.

The students, who are increasingly aware of support from Chinese around the world, hailed the protest as part of an ”international Chinese people’s demonstration day” to put pressure on the Government. Other demonstrations were held in several Chinese cities, including the economic capital, Shanghai, as well as in Taiwan, Hong Kong, Australia and the United States.

One of the largest protests was in Hong Kong, which held a political rally with a crowd estimated at more than 300,000. Such protests are likely to put new pressure on the Chinese authorities, who are sensitive to turbulence in Hong Kong in the years before they inherit the British territory in 1997. [Source]

And from the Los Angeles Times:

In a related development, the government gave its strongest sign to date it might adopt a conciliatory stance toward the protesters, making what appeared to be a retraction of an April 26 editorial in the People’s Daily, the official party organ, that touched off a furor among students by branding them as unpatriotic and as causing chaos.

The official New China News Agency said late Sunday evening that the party’s ruling body, the Central Committee, and the State Council, the top administrative organ of the government, “have fully affirmed their patriotic enthusiasm and will not investigate and punish those students who have voiced and committed extremist words and acts.”

In a dispatch that opened by describing letters and telegrams purportedly sent by Chinese citizens urging students to leave the square, the agency said the two bodies “also pledged to provide the students with conveniences for their evacuation from Tian An Men Square and to continue to hold extensive dialogues at various levels and through various channels with the students and people in other circles.”

Authorities may have little choice but to deal leniently with the students and other pro-democracy dissidents, owing to an apparently deep reservoir of support among the general populace. [Source]

See also from the same day: