CDT was sent the following account of the Shalan flash flood (Note: The author, Xiaorong, is not CDT Guest Blogger Li Xiaorong). The essay is based on an article written by a Chinese journalist, which was posted on a BBS but never published in the Chinese mainstream media due to the government’s restrictions on coverage of the incident. The Chinese article is attached below in full.

The flood has been a hot topic on Chinese BBS sites. A moving poem written for the children killed has received widespread attention online. For more about media coverage of the Shalan tragedy, see ESWN’s recent posts here and here.

–A tragedy caused by a series of mistakes‚Ä®

“When I wrote it down, I can feel my heart beating; even I could live forever, I would never forget such a feeling in my heart.” —

3:00pm, June 13th, 2005, when I saw the fingerprints left by those kids, I fully understood what Theodore Rousseau meant.

–Written by journalist Xianghe Guo, from The Morning News.‚Ä®

1. Warnings being neglected again and again

An old lady named Guoqin Zhao came to the Shalan central elementary school about 30 minutes before the water hit the town. She took her two grand daughters back home, and she saved their lives in time. She also warned teachers that the flood was coming, but her message was neglected.

That was the forth time that the warning message was neglected by the school.

People in villages upriver called the Shalan local government and the police department, and warned them of the impending flood. A Shalan government official named Qingtao Wang actually picked up the phone the first time. After he got the warning message from the party secretary Zheng Can in the village upriver, Wang answered that since he was the only one working at the city hall, he could not leave; so there was nothing he could help. He hung up and never picked up the phone again. There were at least three independent warning calls from villages upriver, and Zheng Can tried again with other phone numbers of the Shalan city hall, but no one answered it.

Zhao Guoqin, the old lady said in anger, “All it takes is a few minutes to evacuate the school, and the kids would be all alive today.”

In fact, the flash flood in Shalan town is not an isolated case in HeiLongJiang Province. There are several cases of flash floods in nearby regions. Heavy rains and floods swept away houses and farms, but nobody at the Shalan local government took these messages seriously. Most of the government officials were already gone for the Chinese holiday, Duang Ngou (The Dragon Boat Day).

The party secretary at Shalan town, Mingjun Huang, missed the warning messages from upriver; so did the last chance to rescue his already damaged reputation as a town leader.

After Mingjun Huang was under investigation for negligence, amid allegations he and the police chief failed to respond quickly enough to the disaster, resentment to him reached the peak. 42-year-old villager, Xinglu Wang, who lost his son during the tragedy, said, “Huang only did three things when he was the party secretary: one fire accident, one construction accident, and plus this flood accident.” The fire accident even drew the criticism from the central government in Beijing.

Villagers showed more dissatisfaction towards the local police department. As parents raced to the school on motorbikes, police officers stopped them to issue $25 fines for permit violations.

“You paid the fine, then went to their office to apply the motorbike permit, which they would never issue to you with all kinds of excuses; so they can continue to fine you next time.” One villager complained. “They would not let us go if we don’t accept the tickets.” It further delayed the rescue.

‚Ä®‚Ä®2. The fingerprints left on the wall

Guoqin Zhao came to the first-year classroom. She shouted to the teacher Li (pseudo-name), “Teacher Li, please stop the class! The dam upstream is broken!”

Students started crying. After lady Zhao picked up her two granddaughters and was ready to leave, she saw their neighbor’s kid Lei Sun was there. So she offered him to leave with her too. At that time, Li’s response was typical as a teacher and an authority. She yelled to her students, “sit down, all of you! No one could leave without your parents!” Lady Zhao left with her two kids without giving further warnings. And teacher Li didn’t even bother to ask what was going on.

Two hours later, only one girl survived out of the 46 students in that classroom. All of them were buried in the cold mud water, including Lei Sun who was stopped by teacher Li to leave with lady Zhao.

The only survived girl named Yuxin Liu, a 7-year-old. When flood dashed into her classroom, Yuxin struggled with her classmates to try to stand up. Luckily, she gripped the heating radiator and climbed onto the windowsill. She managed to stand in the deep water for more than one hour. The mud water once even merged her completely.

About 3pm, Yuxin’s uncle rushed in to search the dead bodies, when he suddenly heard his nephew’s voice from above. “Uncle, what are you looking for? I am here.” Yuxin’d uncle cried out loudly, while the little girl was still calm.

When the parents entered the classroom, their experiences were the worst nightmares: they touched and fished one after another small dead bodies out of the blackened water.

Most of the kid died in their classrooms with their bags and books. We still can find their belongings until June 14th: cut-and-paste, teacher-parents communication cards, photos of the June 1st show, one-finger-long yellow shoes, candies, and their writings.

There are a lot of fingerprints left on the wall: the large ones were from their parents who tried to clean their hands after searching in the mud; the small ones, some of which almost reached the ceiling, were from the kids. The flood once reached the level right below the top panel of window glass.

There are only 2 dead out of 22 students in the third grade, class II. A girl named Ningning Song said that Teacher Rong Li asked them to pile up the desks and chairs. They broke windows, and tried to sit on the top window-frames. They were crying, and teacher Rong Li calmed them down, “It will be OK. The water will be gone soon.”

The best survival rates were achieved in those classes whose teachers didn’t abandon their students. The fifth grade class II only have one child dead. Teacher Zhanhong Wang and two parents managed to break the window, and hand the students out onto the roof. And those girls had gained their life-time memory of the brave behaviors from their male classmates. A girl named Linlin Zeng told the doctor at local hospital with sincere gratitude that they were all dragged up by those boys.

Yet the damage to Shalan town beyond imagination. At 3:30pm, the first kid covered in mud was carried into the local health center, and he was dead already. From then on until late night, one after another, dead bodies were soon laid everywhere. Around 4pm, the kid of the general manager of the local health center Hongquan Xie was sent in. Xie checked his kid quickly and told his wife, “He is dead.” Xie’s wife refused to accept it, continued to work on him, and later transferred him to the city hospital.

At the funeral home, mother Yanmin Xing, holding her daughter’s photo, broke into tears, “I dragged her body out of the mud! How terrible it is to my poor kid!”

Angry villagers said local officials had failed to lend a hand. When the police chief Zuoyu Li came, he wore a life jacket. However, he just stood outside and watched. One parent asked Zuoyu Li if he could borrow the life jacket. Zuoyu Li refused, so the parent jumped into the water without it.

It took at least 2 hours for the flood to reach Shalan town from 20 kilometer upriver, according to the measurement calculated by villagers. That meant students would have enough time to be evacuated, or just run out of the school. People expressed their angers towards those bureaucrats on the meeting with city officials, “The flooding triggered by torrential rain is a natural disaster, but those officials who contributed to the man-made disaster should also be punished.”

Where are the other 47 students? Is it so difficult to find out where the missing students or their parents are? Or the real question is: Does the local official really care how many students were dead?

9:00 am, June 11th. The party vice-secretary of Ning-an, Xinping Li, was surrounded by angry villagers, because Xinping Li reported to his superior right in front of the villagers who just lost their children, “It is not a big deal. Just some people died.”

At the local morgue, most of one hundred refrigerators contained not one but two bodies. Other children were missing or had been buried by parents. Villagers estimated half of the school children were dead. “They are saying it’s fewer than that because they don’t want the truth to get out.” said Ning Xuebin, 32, whose niece drowned in her classroom.

So, what do they care? The lower officials are only responsible to their superiors. If their superiors demanded them to down-play the degree of damage, they would do anything to cover it up. The journalist who first reported it put her career in serious danger. Luckily, the internet picked it up, and other Media followed up quickly to spread the news out.

There have also been angry protests by local people. The local official made a cold-blooded threat: “if you continue to complain or talk to unknown reporters, you won’t get even one penny for compensation!” The two representatives of the villagers early agreed to provide the death-list, but on June 14th, they changed their minds quietly and tried to hide away from the reporters.

On June 15th, the State Department propaganda had set strict rules what could be reported and what not. You will see news such that the higher officials from HeiLongJiang province traveled hundreds of miles to visit the villagers (What a marvelous visit!), the central government sent a working committee to help the villagers (How considerate the government is!) etc, but no one would ever know how many students died, who they are, and how their families are going to carry on.

Notes 1 and 2 made by Xiaorong: The numbers were derived from two independent news sources: one is about the students in the hospital; and the other is the students returning to school.

This essay is based on an article published online. Translated and rewritten by Xiaorong. 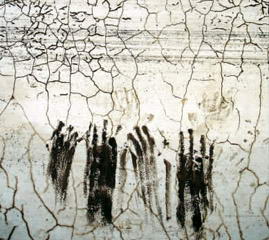 This topic on the Web.