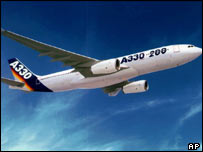 Airbus A330 A Chinese airline has placed an order for 10 Airbus A330 aircraft in a deal worth $1.5bn (¬£815m). The deal was witnessed by British Prime Minister Tony Blair and his Chinese counterpart Wen Jiabao, during a visit by Mr Blair on European Union business.

The purchaser, China Southern Airlines, has already bought four Airbus jets from the European consortium. The A330s, capable of carrying more than 300 passengers, are due for delivery in 2007-2008.

The deal was announced during a visit by European officials to Beijing, meant to boost trade between China and the EU. “It is a hugely important deal for Airbus in what is a very important market,” said Iain Gray, the British general manager of Airbus.

Benedict Rogers: World Must “Wake Up” on Beijing’s Threat to HK