Two years and four months after whistleblower Dr. Li Wenliang’s death from COVID-19, the “Wailing Wall” that emerged in the comments under his last Weibo post continues to serve as a repository for the hopes, dreams, worries, and opinions of countless Chinese citizens. CDT editors regularly collect and archive Wailing Wall content, including the selection of comments translated below.

In September, many Wailing Wall comments referenced current events such as the deadly bus crash in Guizhou province that killed 27 people and injured 20; the death of Queen Elizabeth II; the protests in Iran; and pandemic lockdowns or restrictions in various Chinese cities.

The Guizhou bus crash, which occurred in the early morning hours of September 18, was particularly galling to many because the 47 passengers being transported to a far-flung quarantine facility were not even COVID patients, but “close contacts” of COVID patients. Some netizens suspected that officials in Guizhou’s provincial capital of Guiyang, under pressure from higher-level authorities to quash COVID outbreaks before the CCP’s 20th Party Congress in October, were trying to “juke the stats” by transporting potentially infected individuals to locations outside their city. Online commenters pointed out the preventability of the accident, criticized state media silence and online censorship of the story, and commemorated the victims with words and artwork including the image below. A number of Weibo users noted that the accident occurred on China’s National Humiliation Day, which refers to the start of the Japanese invasion of China in 1931, and suggested that it gave a new layer of meaning to the day’s name.

Making the rounds on wechat today. Never underestimate the powerful creativity that can flow out of the need to skirt censorship. pic.twitter.com/HKGtethanB

The following Wailing Wall comments, selected and translated by CDT editors, were originally posted during the week of September 17-22, 2022:

韬光养菲：Dr. Li, I’m back again. I finally understand why Iris Chang committed suicide after writing her book. Yesterday and today, I haven’t been able to extract myself from the suffering of those 27 people and the human misery in Tibet and Xinjiang. I feel a depression coming on, because there seems to be no solution to all this suffering. I used to believe in this country. I thought they wouldn’t allow the common people to suffer, because they loved the common people, but now, it is the common people who are paying the price for their actions. I’ve collapsed, and I don’t see the point of living anymore. // Bloodwitch585: My faith is slowly, slowly collapsing.

舞袖长夏：I’m terrified. We’re all on that bus. // Yiwwwwwwwww：Every one of us is a passenger.

兔军临天下：They’re always experimenting on the Chinese people, and they never take responsibility for it. Each of these experiments lasts a decade or more. How many experiments have they conducted over the last 70 years? The formulas differ, the distorted results vary, but the one constant is their monopoly on power!

第一个名字不知道该叫什么：All of us are on that bus, but the chief culprit offered only an apology, as if an apology could prevent such tragedies from recurring. The pilot was wrong, the navigator was wrong, but all they offered was a measly apology.

微笑的血精灵：Dr. Li, the rollover bus crash in Guizhou occupies only a tiny little spot in the bottom right-hand corner of page eight of today’s People’s Daily.

A screenshot shows a tiny little blurb about the bus crash circled in red at the bottom right-hand corner of page eight of the People’s Daily newspaper.

邹悦-墨尘：Dr. Li, I sincerely hope the Iranian people can fight for and win their rightful freedom and happiness. I never expected them to be so brave—unlike us, who have been made subservient by a few [PPE-clad] “big whites,” and who have only your last Weibo post as our Wailing Wall …

天命登前途：They limit the freedom of the people in the name of protecting the people.

江东小锦鲤：After you left us, those of us who survived didn’t make the world a better place, nor did we draw on your strength to protect our compatriots. We should be ashamed.

鲜花下牛粪：Dr. Li, it’s Monday, September 19, 2022, and this is my 24th day visiting you. Queen Elizabeth II is being buried today, and mourners queued for dozens of hours just to bow before her coffin, make the sign of the cross, and fold their hands in prayer. There is a monument to the late Queen at Westminster Abbey, and there is a monument to you in my heart. From now on, I want to come here every day to “clock in” and record the days of our “coexistence.” Number 24.

哈勃ddg：Dr. Li, I watched the Jiabiangou [1950s labor camp] documentary recently, and I feel like we’re either already in Jiabiangou, or on the path to Jiabiangou. This country is terrifying.

饭否的否：’Morning, Dr. Li. We’re all on the same bus. We did not resist their unlawful and unauthorized use of public power to violently break into private residences, kill pets and damage private property, or forcibly detain or quarantine us in the name of “potential infection.” We do not have the freedom to move about, the freedom to work, the freedom to live, or the freedom to speak. We have no right to be free from fear of the unknown. And forget about saying “May the dead rest in peace”—how can they possibly rest in peace?

兔子雨林110：September 18, 27 dead, a Day of National Humiliation—how to voice this desolation? (The last part is a line from Song Dynasty poet Su Shi/Su Dongpo.) [Chinese]

邹悦-墨尘：Dr. Li, “dynamic clearing” has become a national policy. Did you ever think that this day would come? As someone who had the courage to speak up, as a resolute whistle-blower, what do you think of our docility?

You should come back and take a look at this world. It really sucks … 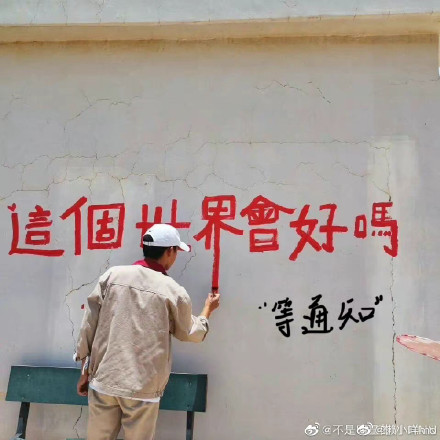 Photo of a man painting a question in red characters on a white wall: “Will this world ever get any better?” Below that, someone has added a note in black characters that reads: “Official announcement forthcoming.”

Montelena: Dr. Li, I just saw elderly people in Tibetan areas being hauled off to makeshift fangcang quarantine hospitals with extremely poor conditions. They were hobbling along, some unable to even straighten their backs. They’re always talking about [protecting] the elderly and children, and then this is what they do? I’m so bitter, and yet so powerless.

白與川_：Dr. Li, I saw that the WHO issued a statement today saying that the pandemic is coming to an end, but looking around me, I get the feeling that a very long [pandemic prevention and control] “chain” has already taken shape.

剥土豆时思考上帝：Freedom is like air: you’re only aware of its existence when you are suffocating. [Chinese]