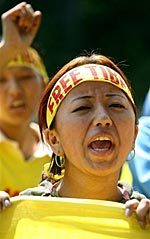 Authorities in the Tibetan region of Karze (Ganzi, in Chinese) in the southwestern Chinese province of Sichuan have detained a 16-year-old girl in connection with a crackdown on pro-independence leafleting last month, Tibetan sources said.