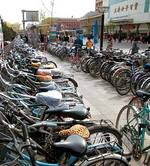 The Beijing I saw from my car driver’s seat was the Beijing of quadruple carriageways and Audi A6s, of the Glory China Centre and the Pacific Century Plaza and Central Park, my favourite luxury housing compound for the sarcastic reason that since it was finished the road system nearby has all been upgraded so that it has become a giant traffic island with hardly a blade of grass in sight.

The Beijing you see from a bicycle – unless you are mad enough to entrust yourself to Chang’an Avenue or the Second Ring Road’s bicycle lane – is completely different.

This is the Beijing not just of alleys like my own, with its rubbish and friendly neighbourhood committee types sitting on their stools with their trousers rolled up, but of small streets with new restaurants opening every day, often decorated in traditional style, and shops selling strangely specialised goods like hot-pot cookers or torches. [Full Text]

The Bike Lanes of Beijing

Campaign to Boost Cycling in Beijing

Chinese told to bring back the bike lane – Richard Spencer

Jonathan Watts: Chinese commuters told: get off your bikes