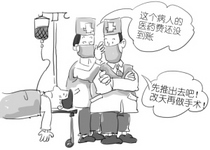 In China, sometimes, a patient’s life depends on how much cash he has.

Xiang Tao, a teenage university student in the southwestern province of Sichuan was left to die at a local hospital because he couldn’t pay the medical bills up front, the Xinhua News Agency reported on September 18.

(cartoon says: Doctor A:”The patient hasn’t paid the bill yet.” Doctor B: “Push him out then. We can work on him later.”)

Translation: Why One Doctor Put Down the Scalpel