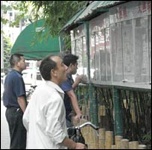 At the editorial meeting at the influential newspaper Beijing Youth Daily, the morning news list is put together without too much discussion.

The editorial team already know the most important stories to include, thanks to the government’s powerful news agency, Xinhua.

“Every day, they make decisions on what not to publish, rather than what to publish. They have to attend at least one meeting a week at the central propaganda department where they’re told what not to report,” he added. [Full Text]