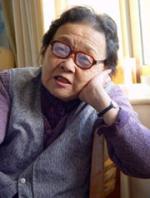 AIDS fighter Gao Yaojie reported on her very own blog today that she was being held captive at home in Zhengzhou, as Henan province authorities tried to stop her from traveling to the United States to fetch an award. The 79-year-old even beat Reuters to the punch. Then, within hours, her blog post vanished.

Gao has been subjected to an illegal form of “soft arrest” at her home since Thursday, Feb. 1, as journalist Wang Keqin puts it. He’s among those who helped publicize her status on his Sohu.com blog earlier on Monday. Over the noon hour on her Sina.com blog, Gao followed up with an SOS of her own. Roughly translated, it read as follows:

Right now there are police and plain-clothed officers in the corridor [outside] my home. They’re watching me and won’t let me leave the house, won’t let me go to Beijing to handle the procedures to go to the United States. Phone calls from outside also can’t come in. Right now my mood is very calm. This shows they’re afraid! If they’re afraid, they should admit wrongdoing, and then should take action to correct it! And not keep watch over me, an aged and ill old lady.

Prior to this, a Henan province vice-governor had visited Gao’s home in an attempt to persuade her from making the voyage, Wang reported. Provincial Party chief Xu Guangchun, who until last year headed up the state broadcasting regulator SARFT, also had planned to meet with her, according to Wang. But he “was given a stern rebuff by Gao Yaojie.”

Sometime in the evening on Monday, both Gao’s post and Wang’s posts about her disappeared.

Best known for blowing the whistle on the mass spread of AIDS via blood banks in Henan in the 1990’s, Gao has been back in the headlines of progressive Chinese press outlets again lately. In an unusally blunt article about her and other AIDS activists published in January in Oriental Outlook Weekly (not currently available online), Gao stated that she “really did not want to live” anymore. She cited the persistant harassment and various forms of deceit activists still faced – from local officials neglecting AIDS orphans to domestic drug makers and charity and research centers profiteering off Beijing’s AIDS awareness campaign. She told the magazine she was followed even when she left the house to buy soap, and in Henan’s AIDS villages, officials offered a 500 yuan bounty to any peasant who spotted her.

Chinese authorities have prevented Gao from heading abroad to lecture and receive awards in the past. She was hoping to fly to Washington, D.C., in March to receive an award for her work from the advocacy group backed by Hillary Clinton. Gao was to fly to Beijing on Sunday evening to process travel documents for her journey, but failed to make her flight. Afterward Wang learned of her detention through fellow activists and friends, and immediately blogged the news.

Biganzi asked Wang if further attention from the international media might benefit Gao’s situation. He said: “Yes, I think so.”