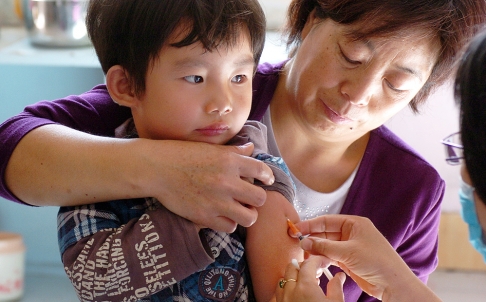 A recent scandal in which substandard DPT vaccinations were reported to have possibly been injected into hundreds of thousands of children in China has further damaged public trust in domestically produced vaccines. The DPT scandal was uncovered after the company—China’s second largest producer of rabies vaccines—was found to have produced faulty vaccinations and forged related production and inspection records. At Reuters, Dominique Patton reports on the incident, which is the latest in a long-running series of similar vaccine scandals in China:

The scandal erupted a week ago, after major vaccine maker Changsheng Biotechnology Co was found to have violated standards in making rabies vaccine for humans.

The regulator ordered it to halt production and recall all its vaccines, the company said in a statement.

On Thursday, however, it told the stock exchange that authorities in its base in northeastern Jilin province were fining it over substandard production, uncovered in 2017, of a DPT vaccine to combat diphtheria, pertussis and tetanus (DPT).

The defective vaccine might not confer immunity but would not affect human safety, provincial authorities had said in November, implicating another company, Wuhan Institute of Biological Products, in substandard DPT vaccines.

[…] The Food and Drug Administration said in a statement on Sunday evening that its investigation had found that Changsheng fabricates production records and product inspection records, and arbitrarily changes process parameters and equipment, “serious violations” of the law. [Source]

A separate report from Reuters notes that Premier Li Keqiang publicly slammed Changsheng, and pledged to “resolutely crack down on illegal and criminal acts that endanger the safety of people’s lives.” At Human Rights Watch, China Director Sophie Richardson offered three recommendations to Premier Li and other leaders that could help in following through on Li’s recent public health pledge:

First, release from incarceration all the lawyers who assisted victims in previous vaccine scandals. From 2006 to 2009, lawyer Tang Jingling represented a group of parents whose children were left permanently disabled after being given problematic meningococcal vaccines. This would require quashing the five-year sentence Tang is currently serving on baseless charges of  “inciting subversion.” Similarly, lawyer Yu Wensheng has languished in a detention center on spurious “subversion” charges. Yu had represented a man who was detained for seeking redress for his daughter, who became seriously ill after being given spoiled vaccine.

Second, stop harassing, detaining, and prosecuting families of victims of faulty vaccines. In July 2015, after being given vaccines at the local government-run epidemic prevention center in Henan province, Wang Nuoyi was diagnosed with a brain injury and other illnesses. In pursuit of justice, her family wrote letters to the government. The authorities responded by detaining Wang’s father for four months in 2017 as well as at least six other members of his family, and prosecuting Wang’s grandmother for “provoking trouble,” which resulted in a two-year prison sentence.

Third, stop punishing journalists for exposing vaccine scandals. In 2010, prominent investigative journalist Wang Keqin was removed from his post at the China Economic Times after the newspaper published his story about mishandled vaccines that led to the deaths of four children in Shanxi province. Amid the current scandal, while netizens are free to condemn the drug company, news articles and social media posts that showed the Chinese government in a critical light continue to be censored. [Source]

(Read more about Wang Keqin’s coverage of the 2010 scandal and the subsequent crackdown on him and his colleagues at China Economic Times, via CDT.)

More on the outcry resulting from the scandal, and central government efforts to contain the public anger, from The New York Times’ Javier C. Hernández:

“We always say that kids are the nation’s future, but if we can’t ensure the safety of such a future, what does the future hold for us?” said Huo Xiaoling, 37, who works in marketing in eastern China and has a 1-year-old daughter who received a vaccine made by Changchun Changsheng.

Ms. Huo said she would no longer buy Chinese-made vaccines because she could not trust officials to clean up the industry.

[…] “We don’t know who we can believe in,” she said. “As Chinese, we probably should have confidence in our country, but getting hurt again and again has made us lose faith.”

Mr. Xi has sought to justify his centralization of power by delivering an efficient and ethical government, but a series of medical scandals has deepened grievances about the health care system and resurrected complaints about government secrecy, especially among the rapidly growing middle class.

On Monday, Mr. Xi struggled to contain public anger over the scandal, the third crisis involving vaccines since 2010. In a statement on Monday while visiting Rwanda, he called the events “terrible and shocking” and said the government would “investigate to the very bottom.” [Source]

At What’s On Weibo, Manya Koetse surveys public anger as expressed on social media, noting signs of censorship of related discussion on Weibo:

At time of writing, the hashtag “Changchun Changsheng Counterfeit Vaccines” (#长春长生造假疫苗#) has already received over 49 million views on Weibo.

The current scandal adds to parents’ mistrust of vaccines in China, with thousands of people on Weibo demanding that those responsible for these violations should be given capital punishment.

On the various Weibo accounts of Chinese state media and local authorities, however, a post has been published that asks people to “not let anger and panic spread,” and to trust that “the relevant departments will deal with this issue in a timely manner.”

Various essays and comments threads about the faulty vaccines were no longer visible as of Sunday afternoon. While Beijing News reports that the Changchun vaccines were not used in Beijing, many questions still linger for worried parents in many other parts of the country. [Source]

Anxiety grew over the weekend as an essay alleging corruption and murky practices in the vaccine industry spread across WeChat. Netizens reposted the self-published essay as censors swooped in to delete the content. “If the state does not protect its citizens, how can we love our country?” asked one Weibo user. Another lamented: “Looking at the news, I don’t dare to have an injection.”

[…] Regulators in Guangdong and Sichuan, cited by state broadcaster CCTV, told residents that Changsheng’s problematic vaccines had not been made available in their provinces. But CCTV acknowledged that 250,000 doses of the problematic vaccine had been sold to the eastern province of Shandong.

[…] The People’s Daily said yesterday that local regulators must “rapidly take action, do a complete investigation and announce authoritative information in a timely manner to pacify public anxiety”. [Source]

All my Wechat friends in China are checking their kids' vaccine records. Wonder which one would eventually be the last straw on urban middle class who are increasingly unsatisfied and demanding change

Circulating on Wechat, October 2017 notice from the Shandong health authorities notifying lower authorities that Changchun's vaccines were noncompliant, requiring a recall (& not to be made public 不予公开) pic.twitter.com/Pm3p71ZlIA

Reporting on the serious loss of public trust in China’s domestic pharmaceutical industry and state inspection apparatus, the South China Morning Post notes other similar recent scandals, and reports that Changsheng has been fined a very small sum in relation to its profits in the aftermath of the DPT vaccine scandal:

In November, the state drug watchdog revealed that another big vaccine maker, the Wuhan Institute of Biological Products, had sold 400,520 inferior DPT vaccines to Chongqing and Hebei. It is still unclear how many children had been given these vaccines, and the company has yet to be punished.

[…] One father in Guangzhou, whose daughter was given four doses of DPT produced by both Changsheng and the Wuhan Institute in 2015 and 2017, said he was angry and no longer had any faith in vaccines made in China. The man, surnamed Lin, said he planned to take his daughter to Hong Kong for vaccinations in the future.

[…] Changsheng Bio-tech was fined 3.4 million yuan (US$502,200) by the Jilin watchdog over the DPT vaccines – a small sum for a listed company that reported 566 million yuan in net profits last year. It also received 48.3 million yuan in new government subsidies in 2017, according to its annual report.

The drug regulator first revealed the company was under investigation in November, saying it could take up to two months, but did not release its findings until Friday. [Source]

Read more about the earlier 2016 vaccine scandal, including a government propaganda directive on relevant coverage, via CDT. See also prior coverage of drug safety and food safety scandals, via CDT.