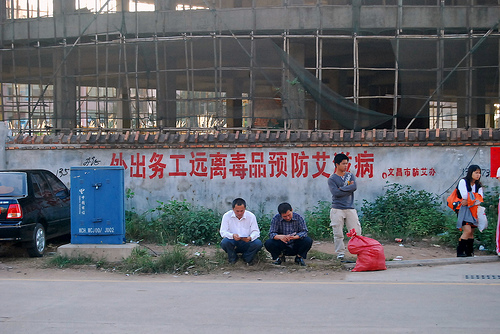 China’s National Health Commission and the State Drug Administration have asked all medical institutions across the country to stop using the units in question and monitor patients who have already been administered the treatment, according to state news media. Officials did not say how many patients had been treated with the blood product.

[…] Just last month, China’s State Drug Administration revised the health warnings on human immunoglobulin products to note that although plasma treatments are screened for pathogens, they nonetheless derive from human blood and therefore may still pose a minor risk of infection to patients.

[…] Late on Wednesday night, the National Medical Products Administration released a statement declaring that although the investigation was still ongoing, preliminary results showed that the blood products in question had tested negative for H.I.V. and the hepatitis B and hepatitis C viruses.

[…] “The cleanup is always fast, pretty soon they’ll say injecting this product is good for your health,” Cui Yongyuan, a Chinese television host and producer, wrote on the microblogging site Sina Weibo, commenting on a report about the investigation’s preliminary results.

At the South China Morning Post, Laurie Chen cited coverage from several mainland news outlets. Xinhua also reported in English on the story. But an early piece from Shanghai-based state-backed English-language outlet Sixth Tone was deleted, and later replaced in slightly altered form with an update on responses from the National Health Commission and National Medical Products Administration in place of earlier comments from the Shanghai and Jiangxi health commissions, as well as a less alarming headline: "HIV Scare: Risk to Public Health ‘Very Low,’ Say Authorities," instead of "Pharma Company May Have Exposed Patients to HIV."

In his round-up of the past week at China Media Project, David Bandurski noted another deletion:

On February 6, the China Food and Drug Administration (国家药监局) released the preliminary findings of its investigation into Shanghai Xinxing Pharmaceutical, and said blood products it had tested came back negative for HIV, hepatitis B and hepatitis C.

On February 7, the WeChat public account “Science and Technology Daily,” operated by the newspaper of the same name, quoted a health expert as saying that the positive result obtained by the facility in Jiangxi, followed by a negative result from national health authorities, suggested the issue might be “a discrepancy in detection technology yielding two results.” By February 9, this WeChat post had already been removed from the platform, but versions were available on other websites. [Source]

The story’s political sensitivity is amplified by its resonance with two others. It follows a series of public outcries over tainted or otherwise substandard vaccines or other medical products: last month, a city-level media directive from Huai’an, Jiangsu urged strict control of "calls to action or inflammatory information" following protests after 145 children received expired polio vaccines. Staff were also asked to gather links and screenshots of examples outside the local jurisdiction, apparently for referral to relevant authorities. Last July, a case involving 250,000 doses prompted a national directive to limit front-page coverage to reprints of official material, with other content given less prominent placement, special topic pages and links to earlier stories forbidden, and "comments attacking the system" targeted for deletion. The scandal also ranked among WeChatScope’s ten most sensitive topics of 2018, as measured by frequency of post-publication removal from public WeChat accounts.

The scandals, especially their repetition, undermines the people’s trust in the state. This would be true to some extent almost anywhere, if only as a failure of regulatory oversight, but they hit harder in China.

As the sociologist Dingxin Zhao has argued, a state can justify its power in essentially three ways: by appealing to shared values, to the sanctity of an electoral process and the rule of law, or to its own performance. In China, the C.C.P.’s hold on power today isn’t based on popular elections or the rule of law, and the party can no longer appeal to the superiority of communism as a holistic political theory. So it must justify its continued rule by consistently delivering public goods, such as economic growth or better standards of living.

[…] In a top-down, state-dominated political system, the link between performance and legitimacy is dangerously tight. When I was conducting research about the health effects of pollution in China last summer, I was amazed to hear so many people, academics and ordinary Chinese, treat a policy failure (like a food safety crisis) or an economic problem (like rising income inequality) as failures of the “system” (tizhi) itself.

[…] Even as policy paralysis at the local level makes major policy failures and scandals more likely, the social discontent spurred by scandals tends to unnerve the government, which then sometimes overreacts. Within a week or so of last summer’s outburst of public outrage, the word “vaccine” became one of the most restricted words on Chinese social media. This month after the scandal in Jinhu, a video circulated on Weibo and WeChat showing a meeting with local officials and residents from a neighboring district, Hongze. A woman can be heard angrily asking about “unknown disturbance” to her phone line and, singling out the local security chief, saying, “Is this way the government treats us?” [Source]

Last week’s story also echoes the tainted blood scandal in Henan in the 1990s, in which a million or more rural residents were infected with HIV after selling blood plasma in a province-backed "Plasma Economy" drive. Activists have long criticized now-Premier Li Keqiang’s handling of the aftermath during his later tenure as provincial governor and then Party secretary. Last year, CDT published a leaked media directive issued before World AIDS Day on December 1, ordering the deletion of an article summarizing recent comments by Li on strengthening treatment and prevention of the disease. Kathleen McLaughlin described the Henan outbreak last September in her account of "my career as an international blood smuggler":

In the early 1990s, government officials hatched a plan to develop a plasma economy, one that would pay farmers for their blood, then generate wealth (mostly for government officials) by using it to produce expensive biopharmaceuticals. The scheme would protect China from the perils of foreign blood and build upon a plentiful natural resource.

[…] A few years ago, a man who was raw material in the plasma economy described the process to me. Twenty years after the catastrophe, it was still a perilous thing for him to speak to a foreign journalist, especially in his hometown. I waited until December, when victims from Henan made their annual 450-mile train ride to Beijing for World Aids Day to protest outside the ministry of health. I sat in the backseat of a cab while the man stood outside my open door.

[…] He sold plasma for several years. Then in 1995 the blood stations shut down suddenly, with no explanation. By 1999, people in his village began falling ill and dying early, painful deaths, at an astounding rate. About a quarter of the 2,000 people in his village sold their plasma. In the process, they were exposed to used needles, dirty equipment and, in many cases, directly injected with the HIV virus as a side-effect of an out-of-control donation system. By the time I met him, more than 200 people in his village, a tenth of the population, had died from Aids.

[…] By [1995], the Henan blood industry was churning, ramped up to such a level that technicians were reusing tubing and needles to save money, and chillingly, sharing between patients the centrifuges that spin blood into plasma and parts. In the rush to extract plasma, donors were often re-injected with other patients’ cells – the equivalent of a deadly biological bomb. [Source]

Dr. Gao Yaojie is 92 and bedridden, but still sassy as ever, sending scolding letters to Chinese government officials. She rang the alarm on China's AIDS catastrophe and was driven into exile for it. My profile on her from a few years ago is here. https://t.co/BTyQLBLu3F https://t.co/NpPtXLFAuv

Last month, The Economist examined the current state of HIV infection across China:

[…] In November China’s Centre for Disease Control said that 850,000 people were known to be HIV-positive, 12% more than a year earlier and almost three times the number in 2010. An official study found that new cases of HIV among students aged between 15 and 24 rose by more than one-third every year in 2011-15, mostly as a result of gay sex. [The report goes on to note that this plays a smaller role overall.]

The virus may not be spreading as fast as these figures suggest. The rapid increase is largely the result of better detection. Over the past decade the number of health facilities offering HIV tests has quadrupled. In 2016 China launched a five-year plan to combat HIV and aids. It increased funding to NGOs providing free self-testing kits to high-risk groups, such as gay men and sex workers. It also gave NGOs money to provide HIV-positive people with free medicine. In 2015 nearly 70% of those diagnosed with HIV were receiving antiretroviral drugs. In 2017 just over 80% were.

[…] The government reckons that 400,000 people may have the virus but not know it, ie, less than 70% of cases appear to have been detected. UNAIDS believes that less than half of gay men carrying HIV in China are aware of it. Discrimination may be deterring some from being screened. A survey of 2,000 people with HIV found that 12% had been refused medical treatment and 15% had been denied work, presumably because of prejudice.

[…] HIV prevalence is low in China compared with the West. The proportion of people believed to have the virus is only 0.09%. In Britain it is 0.15% and in America 0.34%. But the leading role of sex as a mode of transmission is common both to China and the West. Preventing infection rates from climbing in China will require shattering taboos and teaching young people about how to have safe sex. [Source]