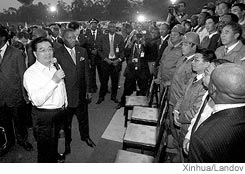 CHAMBISHI, Zambia — Chinese President Hu Jintao embarked on an upbeat tour of Africa this week, doling out aid and lauding China’s growing economic and political ties with the continent.

But there is little love for China in this ramshackle township, which had to be dropped from the agenda of President Hu’s weekend visit to Zambia because of likely unrest.

Set amid rolling hills in Zambia’s copper belt, Chambishi was supposed to be a showcase of Sino-African friendship. China’s state metals conglomerate, China Non-Ferrous Metal Mining (Group) Co., bought the mothballed copper mine here in 1998, bringing plenty of jobs and investments. Initial gratitude, however, quickly turned into seething discontent, as the new Chinese owners banned union activity and cut corners on safety. In 2005, dozens of locals were killed in a blast at the Chinese explosives facility serving the mine — the worst industrial disaster in Zambia’s history. Then, the following year, protesting Zambian employees were sprayed with gunfire. “The Chinese, they don’t even consider us to be human beings,” complains Albert Mwanaumo, a former Chambishi miner who says he was shot by a Chinese supervisor. [Full Text, subscribers only]

Chinese Manager Killed at Zambian Mine

China in Africa: King Cobra and the Dragon

What Sata’s Win in Zambia Means for China

The Zambian Shootings in the Chinese Media