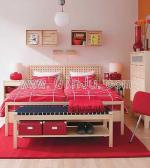 Chinese young are no different than Americans, at least in terms of spending, such as on wedding. From Xinhua via China Daily (photo: nice furnishing and a cozy home are increasingly part of newly-wed couples, via alibaba):

An analysis of nearly 60,000 couples showed that more than 70 percent of the spending goes on durables such as furniture and home appliances. The wedding itself — the ceremony, photography, wedding gowns, the honeymoon and jewelry — accounted for less than 20,000 yuan, 15.5 percent of the total, and analysts claim there is room for growth there.