Chinese “Apprentice” On The Couch 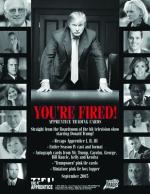 From the department of stupid TV trivia:

The makers of China’s long-awaited spinoff of The Apprentice are soliciting advice from local psychiatric experts about methods to screen applicants, according to a source familar with the situation, in an effort to assemble just the right mix of money-grubbing young execs.

Xue Tu (Â≠¶Âæí), as “The Apprentice China” is known in Chinese, is being trumpeted the first in a stream of copycats of American reality series to enter the China market with licensing rights. But the show is still waiting on final approvals from the State Administration of Radio, Film and Television. “Nothing will go forward until they get the child-bearing permitÔºàÂáÜÁîüËØÅÔºâfor their baby,” the source said, using a family planning metaphor sometimes employed in the idiom of Chinese business.

Meantime, the producers are busying about preparations to air later this year.

The Beijing News reported in January that producers Golden Sea (Âåó‰∫¨ÈáëÊ∞¥ÂêåÊ∫êÂΩ±ËßÜÊñáÂåñ‰º†Â™íÊúâÈôêÂÖ¨Âè∏) reached a deal with Beijing Television to carry the series. It would be a logical partnership, going up against “Winner” (ÂàõÊô∫Ëµ¢ÂÆ∂) on Shanghai’s Oriental Television and “Win in China” (Ëµ¢Âú®‰∏≠ÂõΩ) on CCTV. But no broadcasting deal will be finalized until SARFT approves the production, according to the source.

The hottest matter of speculation is who will be recruited to fill the shoes of Donald Trump, host of the U.S. version. From the start, speculation has centred on perhaps the only da heng(Â§ß‰∫®, ‘bigwig’) developer in China with a name big enough to compare to The Donald’s: the elfin and balding Pan Shiyi (ÊΩòÁü≥Â±π). Trump and Pan were in the midst of hashing out a deal to adapt the show back in 2005 when for unknown reasons talks broke down, the South China Morning Post reported at the time. The producers still have to see who has the time to commit and can the political taste test of TV regulators, says the source. They also have considered model capitalists like Liu Chuanzhi of Lenovo, who already has appeared on “Win in China”. A last resort option would be to rotate laobanmen.

To fish through the sea (Êµ∑ÈÄâ) of possible contestants, the producers also have begun to shop around for the right psychological screening methodology. “Win in China,” though not considered a success in the ratings, received a whopping 120,000 applications in its first season, reported The Beijing News. “Winner” already subjects interested hotshots to an extensive set of questions designed to anticipate their behavior on camera.

Recently, a Xue Tu representative sat down with counterparts from Beijing’s cottage industry of new-age therapy and coaching to discuss what might work for The Apprentice. “We’re looking for the right chemistry,” explained the Xue Tu rep, switching from Chinese to English to stress the word “chemistry”. The rep continued: “A lot of the candidates are really strong individuals, but they can’t all be the same. We need the right mix. The apprentices have to be able to work together with their teammates, and with the boss. Otherwise, this show won’t be fun to watch. It might even fall apart!”

The consultants instantly recommended Enneagrams, the popular system that breaks down human beings into nine basic character types. “Enneagrams is well-established and scientific, deep yet direct,” summed up one. “It’s definitely the right thing for you.”

It was unclear whether the makers of Xue Tu would take their advice, however. The person representing the show was diagnosed a Number Six – the “loyalist” or “guardian” – the classification typically given a skeptic.

How Xi Jinping is Bringing China’s Media to Heel